Ferguson’s Ban Is Anything But “Fair”

On top of the countless injuries that are surmounting at Old Trafford, Manchester United is now faced with the news that Sir Alex Ferguson will be suspended for an extended period of time. 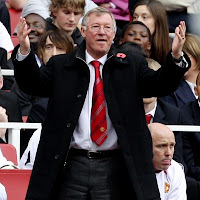 Ferguson, who has had numerous, well-documented run-ins with the Football Association over his 24-year tenure at Old Trafford, has been given a three-match touchline ban and £30,000 fine for his latest rant against an incompetent referee following United’s match against Chelsea.

If that was not enough, the FA decided that Ferguson did enough to invoke the clause from a warning that they gave him last season to earn a further two-match suspension, but, after all is said and done, it is in their best interest to not make a mockery of themselves by not punishing other managers, players and other officials in a similar fashion.

The football world is not any different from the outside world as political correctness has wrapped it ugly self right around the sport and continues to strangle anyone who states his or her beliefs.

To his credit though, Sir Alex has never been able to curbed speaking his honest thoughts, which, to be frank, is a rare commodity this day and age, but it was a word that got him into hot water this time. The FA hammered down a ridiculous three-match ban based for Ferguson using the word “fair” to describe Martin Atkinson’s diabolical refereeing performance against Chelsea on March 1.

Nani spoke out for the first time since suffering a potentially season-ending injury against Liverpool, and the United winger used the same word to describe Phil Dowd’s inability to send Jamie Carragher off for his wild, reckless challenge. Admirably, Nani stated, “I don’t want protection. I just want the referees to be fair. If it is a red card, they have to give it,” which is exactly what Sir Alex said about David Luiz’s three cynical fouls on both Javier Hernandez and Wayne Rooney.

If the Football Association, and their “independent regulatory commission,” which is always comprised of people based in London, does not punish Nani it just solidifies the claims that there is a witch-hunt for Ferguson by the biased heads of English football. Avram Grant, who has been charged with improper conduct for his outspoken comments of Mike Jones following West Ham United’s exit from the FA Cup last weekend, should not be let off the hook and face a similar ban as Ferguson, but we all know that will not happen.

What it comes down to is a battle of supremacy and egos with the Football Association, because Manchester United has been, by far, the most popular team since they created the Barclays Premier League in 1992. These pompous, over-educated executives do not like to see their product, be outshone by anyone, especially one of their pillars.

There is no question the fact that their animosity toward United heightened in 2000 when the Reds were a founding member of G-14, which was an organization of 14 top European clubs considering to breakaway from their respective leagues.

Following every match, multiple microphones are jammed into the face of manager without giving them a chance to cool off, which has been enforced by the FA. Unless they foolishly think that every manager will give a robotic answer, the hierarchy of English football should expect that someone like Sir Alex would speak his praise or displeasure of what he saw out on the football pitch.

Stating what should be the obvious, managers are no different than any other person and will never have a rehearsed answer to give a poking press reporter, who, purposely, asks questions to incite controversial answers. Even as a well-seasoned professional, Sir Alex is living proof that one will never be ceased to be amazed as he has to learn childish things in fear of offending someone.

Bias critics will say that you can never teach a dog, like Ferguson, new tricks, but the the reality of it all, is that the Gaffer has not claimed anything that anyone in their right mind has thought or has been thinking. Respectably, Carlo Ancelotti not only admitted that Sir Alex was right in his assessment of Atkinson after the game, but the Chelsea manager also said that the ban that was imposed on him was very harsh.

The five match ban begins after the match with Bolton Wanderers at Old Trafford on Saturday, will see the United boss miss five crucial matches in the final stage of United’s season. Ferguson will miss the matches against West Ham United at Upton Park (a); Fulham at home; Manchester City in the FA Cup at Wembley Stadium; Everton at Old Trafford and the highly-anticipated, potential title-deciding match against Arsenal at the Emirates.

Sir Alex has been banned for eight matches since 2003 (stats from Republik of Mancunia), but coincidentally, United plays three of those opponents – Fulham West Ham and Everton – again. What should not be overlooked is the fact that United plays three London-based clubs – with two of those games in the nation’s capital, and another match that Sir Alex will be sitting in the stands for is the all-Manchester half of the FA Cup Semifinal at Wembley.

A conspiracy theory at his finest. It is a definite blow that Sir Alex Ferguson’s ban come at such a testing time for the Reds, but the amount of matches that the Football Association imposed should not come as any surprise as they try to mask their attempt to butcher Manchester United’s potential successful campaign.