Liverpool will look to close the gap at the top of the table with a win over Burnley at Turf Moor. Here is the team we expect Jurgen Klopp to select:

Liverpool will be looking to close the gap at the top of the table with a win over Burnley at Turf Moor on Sunday afternoon. Here is the team we expect Jurgen Klopp to select:

Goalkeeper: Number one goalkeeper Alisson Becker is set to continue between the sticks so Caoimhin Kelleher will remain on the bench.

Defence: Klopp could freshen things up in defence to give Joel Matip a rest. Ibrahima Konate is pushing for a recall and he could come in to line-up alongside Virgil van Dijk in the middle of the Liverpool back four.

Andrew Robertson should continue at left-back ahead of Kostas Tsimikas. Trent Alexander-Arnold is also expected to start once again at right-back and he’ll be looking to continue his excellent recent form.

Midfield: Liverpool have plenty of options in midfield with Klopp boasting a fully-fit squad to choose from. However, Fabinho is almost guaranteed to keep his place in the holding role this weekend.

The Reds are set to welcome Jordan Henderson back into the squad. The skipper missed Thursday night’s win over Leicester City with a minor back injury, but has been passed fit and should be recalled in midfield.

Curtis Jones is the man likely to make way for Henderson. Alex Oxlade-Chamberlain, James Milner, Naby Keita and Harvey Elliott are all options for Klopp if he wants to rotate further. But Thiago Alcantara is likely to keep his place against Burnley.

Attack: Mohamed Salah made his return off the bench on Thursday night so he’s pushing for a recall. Klopp is expected to bring his star man back into the starting eleven at Turf Moor.

Diogo Jota continued his excellent form this season after scoring a double against Leicester in midweek so he should keep his place this weekend.

Luis Diaz impressed on his full debut last time out but Klopp may not want to throw him in from the start away to Burnley. Therefore, he might drop to the bench with Roberto Firmino lining-up alongside Salah and Jota.

Therefore, Diaz will be an option from the bench along with Takumi Minamino. Divock Origi is also in contention but missed out on a place in the squad on Thursday night. 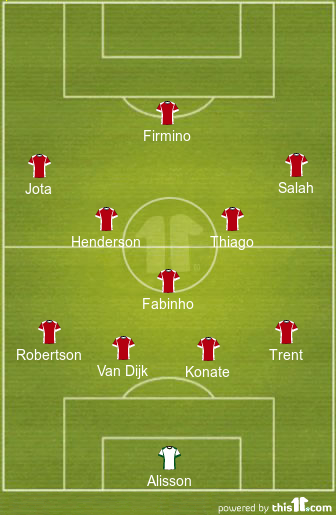