Liverpool take on Chelsea in the Carabao Cup final at Wembley on Sunday afternoon. Here is the team we expect Jurgen Klopp to select:

Liverpool take on Chelsea in the Carabao Cup final at Wembley on Sunday afternoon. Here is the team we expect Jurgen Klopp to select:

Goalkeeper: Number one goalkeeper Alisson Becker would usually be a dead cert to start in such an important game. However, Jurgen Klopp has been very clear that he’ll stick with Caoimhin Kelleher in the final after he played a key role in helping Liverpool reach Wembley.

Defence: Klopp is unlikely to tinker too much with his defence but we could see Ibrahima Konate coming in for Joel Matip. Virgil van Dijk is certain to start once again and Konate has impressed alongside the Dutchman at times this season.

Trent Alexander-Arnold will keep his place at right-back while Andrew Robertson should start once again at left-back. That means Kostas Tsimikas will have to settle for a place on the bench against Chelsea.

Midfield: Liverpool are expected to recall captain Jordan Henderson after he was rested for the resounding win over Leeds United in midweek. Curtis Jones is the man set to make way for the 31-year-old skipper.

Fabinho will start once again in the holding role for the Merseysiders while Thiago Alcantara should keep his place after another terrific display in midweek.

James Milner, Harvey Elliott, Alex Oxlade-Chamberlain and Naby Keita will all be midfield options for Klopp along with Jones so Liverpool have plenty of depth in the middle of the park.

Attack: Unfortunately, Roberto Firmino has been ruled of the Carabao Cup final after failing to overcome a muscle problem that’s hampered him recently.

Liverpool also confirmed that Diogo Jota remains a major doubt due to an ankle injury. The Portuguese forward has taken part in training but Klopp is unlikely to take any risks so Jota isn’t expected to start against Chelsea.

Fortunately for the Reds, Luis Diaz has settled quickly following his move in January and he’s set to keep his place alongside Sadio Mane and Mohamed Salah in attack. Divock Origi and Takumi Minamino will remain on the bench. 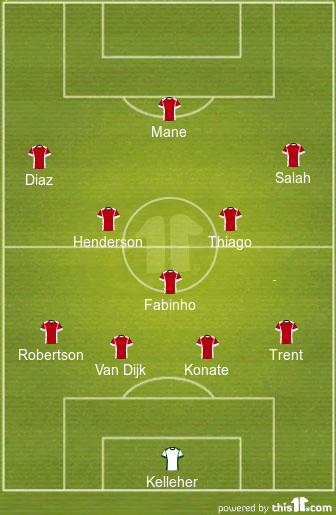