Arsenal take on Manchester United at the Emirates Stadium on Saturday lunchtime. Here is the side Mikel Arteta is expected to pick for the game

Arsenal take on Manchester United at the Emirates Stadium on Saturday lunchtime. Here is the side Mikel Arteta is expected to pick:

Goalkeeper: Aaron Ramsdale may have been disappointed with Chelsea’s first goal on Wednesday night but he’s still Arsenal’s undisputed number one so will keep his place between the sticks against Man Utd.

Defence: Arteta sprang a surprise at Stamford Bridge after handing Rob Holding a rare start and he may have done enough to keep his place alongside Gabriel in the middle of Arsenal’s defence.

Takehiro Tomiyasu is back in full training after recovering from a troublesome calf injury but after three months out, a place on the bench is the best he can hope for this weekend. That means Ben White could continue at right-back with Cedric Soares missing out.

Kieran Tierney has been ruled out for the rest of the season following knee surgery. Nuno Tavares has put-in a couple of solid performances over the last week so he should retain his place at left-back against Man Utd.

Midfield: Arsenal are still without Thomas Partey as the Ghana midfielder is working his way back from a thigh problem. Mohamed Elneny produced a solid display during the win at Chelsea after being handed a shock start, so he should retain his place ahead of Albert Sambi Lokonga.

Granit Xhaka will start once again for the Gunners after an impressive performance at Stamford Bridge, while Martin Odegaard should also keep his place in the attacking central midfield role.

Attack: Eddie Nketiah was the star for Arsenal on Wednesday night after scoring two well-taken goals. He should have done enough to keep his place up front so Alexandre Lacazette will remain on the bench versus Man Utd.

Bukayo Saka scored his 10th Premier League goal of the season with a late penalty against Chelsea and he’ll start once again on the right flank this weekend.

Emile Smith Rowe was also on the scoresheet with a superb finish in midweek, however, he may find himself back on the bench against United. Arteta has regularly rotated Smith Rowe and Gabriel Martinelli, so the 20-year-old Brazilian could be recalled to freshen things up in attack. 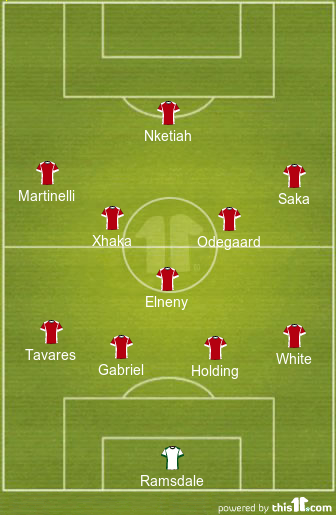