Footage has emerged showing Gabriel Jesus at the Emirates wearing an Arsenal kit ahead of an announcement confirming his move form Manchester City. 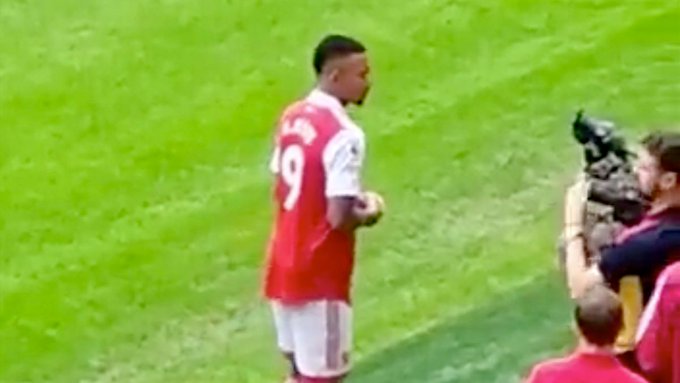 Footage has emerged showing Gabriel Jesus at the Emirates Stadium wearing an Arsenal kit ahead of an official announcement confirming his move form Manchester City.

Negotiations with Man City proved to be difficult but a breakthrough was finally reached last weekend when widespread reports claimed Arsenal agreed a £45m deal to sign the South American.

The 25-year-old forward was photographed with Arsenal technical director Edu in London on Tuesday morning. He undertook his medical at a facility in the capital before heading to London Colney to meet his new team mates.

Fans have been patiently waiting for an announcement from Arsenal but it appears the move has already been completed as leaked footage shows Gabriel walking around the Emirates wearing his new Arsenal kit.

The video is most likely part of his media duties ahead of an official announcement but it also appeares to confirm Gabriel will be wearing the No.9 shirt for the Gunners this coming season.

Gabriel Jesus, wearing Arsenal’s #9, at the Emirates Stadium this morning, as the club prepare media duties ahead of the announcement of his move. 👀 #afc pic.twitter.com/D5BVTaSOVU

Based on this footage, it looks like Gabriel’s move to Arsenal should be confirmed imminently and the Brazilian is expected to be an excellent addition to Arteta’s squad.

The striker provided 13 goals and 12 assists for Man City last season, despite starting just 27 games in all competitions, and he can play anywhere across the front three so his versatility will be a useful asset.

Gabriel had just one year left on his contract at Man City and decided it was time for a move after Pep Guardiola brought in Erling Haaland from Borussia Dortmund.

The South American wants regular first team football ahead of the World Cup and Arteta can promise him a starting role up front at Arsenal. The pair know each other well from their time together at City and they’ve now been reunited at the Emirates.

Gabriel is set to be unveiled as Arsenal’s fourth major signing of the summer following the arrivals of goalkeeper Matt Turner, winger Marquinhos and midfielder Fabio Vieira.