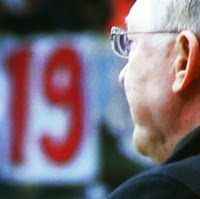 When the final whistle blew at Ewood Park to signal that Manchester United won their 19th top flight title, the celebratory reactions of Sir Alex Ferguson showed just how much winning still means to him.

It should go without saying, but the United manager is certainly a one-off, because winning a piece of silverware, no matter the competition, never seems to lose its gloss with him – and that mentality is what the club is all about.

Even though Ferguson was elated to win the record-breaking domestic title, personally his 12th, he has already shifted his focus on to the next two matches against Blackpool and Barcelona in the 2011 UEFA Champions League Final.

Many clubs have certain expectations, but at Old Trafford, if the Reds do not win major silverware, it is considered a disappointing season – no matter the circumstances. To further prove that statement, Sir Alex, the most successful manager in English history, is constantly ridiculed if United are not sitting pretty on top of the table and he is all washed up and has lost the plot.

Ferguson knows that there are a certain set of standards for him, and then for other managers in the Premier League. However, it is quite comical when owners of other clubs try to hold their own in the same light and they fail miserably.

But to touch on the point of expectations, Manchester City had, what they consider, an outstanding campaign by qualifying for the Champions League next season and winning their first trophy in 35 years by capturing the FA Cup. If United were to have that sort of season, which they did a few years back, it would be considered as a failure, and Ferguson’s job and reputation would be on the line.

What many sometimes fail to take into consideration is that Ferguson does just aim for a one-off season, he utilizes his entire squad to wins trophies on a continual basis. He loves to incorporate young players into the first team every season in hopes to have continued success through them – a trickle down theory.

Some may think that he is going to completely transform the squad this summer, but if anyone knows Ferguson’s way, he will be giving a couple of the youngsters a chance to prove that they are the future of United. Danny Welbeck and Tom Cleverly are more than likely going to come back and play bigger roles – because the United boss believes in youth.

By getting a good mix of youth and experience, which is a tough balance to get right, Sir Alex firmly believes that get that sustained success that he will need to have these youngsters heading the club for the next five or so years. There are a couple of problems with this type of way doing things, even though it is the United way – and always has been dating back to Sir Matt Busby.

Over the past 20 years, the supporters have come to expect success every year – not just a Carling Cup or FA Cup, but the Barclays Premier League or Champions League – and rightfully so as well. When there is either a dip or transition within the squad, the fans still crave titles and championships, which is the right mindset to have. That type of attitude by the fans is certainly felt – and appreciated – by Ferguson and he then in turns put that burden on the players.

That massive amount of pressure on their young shoulders to perform on an extremely high level every week. The disheartening part, is that some of them never fulfill their promise, but, with Ferguson at the helm, the club still moves on.