How Manchester United Will Beat Barcelona… 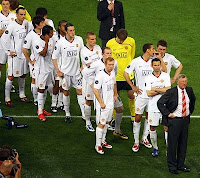 Everyone knows that Barcelona are clearly the odds-on favorite to win the 2011 UEFA Champions League Final, but that really is the ideal role for Manchester United to have.

Sir Alex Ferguson has the daunting task of conjuring up a game plan to offset the mesmerizing Catalan attack, but he knows that the solution to that lies within his own team if they are to stun the football world.

One thing that has been apparent to Barca’s success over the last couple of seasons is that they have been able to capitalize on other team’s mistakes, and that simply means that the Reds must have composure, concentration and patience – which is all easier said than done, though.

The United boss relishes the role of underdog, because that is when his teams have normally played their best football, but he cannot allow emotion get involved in the equation. The reason that this is such key factor to their approach is that a lot of the Reds were apart of the 2009 UEFA Champions League Final that saw them played off the pitch by Barcelona.

However, the season before on their way to the 2008 title, United expertly kept a very similar L’equip blaugrana at bay with a tidy, two-legged semi-final victory. Yes, it took a moment of brilliance and a thunderous strike to provide the difference, but it was the organizational structure that did not let them down then.

There is no question that Ferguson will assign each player an assignment or duty against Barca, but the ultimate hope is that the team will collectively hold up their end up their bargain and help out their fellow teammates. There is no doubting the fact that this is a different Manchester United squad, not just team, that is facing the three-European champions.

Last time, the United game plan was focused completely around Cristiano Ronaldo with the hope of him leading them back to another European triumph. That plan blew up in Ferguson’s face when the battle for the ball limited the amount of touches, which ultimately influenced Ronaldo to the role of mere spectator.

Now, there is a different approach, because not only does each player has the ability to turn this match into United’s favor, but the team is more well-rounded then it was then. Yes, there is a good chance that Ferguson could send out a line-up with just one, maybe two changes from that game, but there is a different feeling.

It would not be far off to say that the Reds did not show up to play against Barcelona, or even they were just that good, but there is a greater sense of team unity, which leads to those three deciding factors.

What will help, and more than likely be crucial, is scoring the first goal, which certainly played right into Barcelona’s hands the last time round. There is no point of playing the, “if that, then this” game of how that game could have been different, and that is something that Sir Alex will stress again to his players.

Depending on which side of the “love / hate” fence you are on with Manchester United will dictate your belief of how they can cope with Barcelona, but Sir Alex Ferguson will make sure that they are not undone again.