A lot of Manchester United fans were left shocked and a little bemused that Dimitar Berbatov, Manchester United’s top scorer and winner of the Golden Boot was left out of the squad entirely for the Champions League final. Fair enough, he wasn’t expecte… 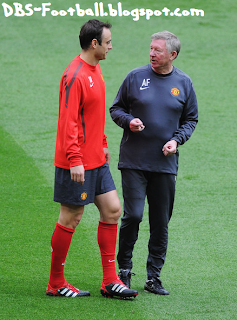 A lot of Manchester United fans were left shocked and a little bemused that Dimitar Berbatov, Manchester United’s top scorer and winner of the Golden Boot was left out of the squad entirely for the Champions League final. Fair enough, he wasn’t expected to be in the first team, but many thought that he at least deserved a place on the bench, through merit mostly, of what he has achieved over the season in terms of goals.

But no, instead, his place was given to someone whom I am a big fan of, Michael Owen. I absolutely understand Sir Alex’s thinking over the decision to pick Owen over Berbatov, especially considering the Bulgarians lack of clinical finishing during the latter half of the season. Michael Owen would always be a sure choice if there is a one on one opportunity late on in the game, even when the pressure is huge – he proved that with his winner against City last season.

In hindsight, Ferguson would have chosen Berbatov to sit on the bench if he knew that in the last 20 minutes of the game, a consolation would have been close to worthless. Barcelona had plenty left in the tank after controlling the game for 90 minutes, and even if United had scored another and taken it to extra time, Barcelona would have again been favourites. It would then, have been best to have Berbatov as an unused substitute to appease him and make him feel just a little bit wanted – a little bit needed at the club, rather than expel him to the stands.

“I have one year left on my contract and I am not going anywhere. We won our 19th title this season, it is time for the 20th.”

“I am probably the happiest among my team-mates, because I became the top goalscorer and we won the title.”

Already behind Rooney and Hernandez in the United pecking order, he now found himself fourth choice for Sir Alex in the biggest game of the season, and of course, he is understandably disappointed. There is talk of him quitting the club, rather than be left on the bench, unused and unwanted.

When questioned over whether Berbatov left Wembley after discovering he wasn’t even in the squad, Sir Alex Ferguson said dismissively that he was in the dressing room.

“It was a difficult decision. It was not something I found easy. I wanted to overload my substitutes in the midfield positions because that was the area which most important in terms of the way Barcelona play.

“It came down to a choice between Michael Owen and Dimitar Berbatov. My view was that if we needed someone to nick a goal in the last few minutes of the game, Michael Owen, with his experience, was the man.”

At 30 years of age, Berbaov isn’t getting any younger, and will only become less effective – unfortunately. Sir Alex would deny the fact that leaving Berbatov out was a subtle hint that he is no longer needed at the club, but that is how it seems. With only a year left, maybe time has run out for Berbatov.