Hello again, another interesting day of transfer gossip, speculation, rumors and news surrounding the Gunners. There are some interesting headlines today, so without further ado, here is the Arsenal Transfer News Roundup.Arsenal interested in Odemwingi…

Hello again, another interesting day of transfer gossip, speculation, rumors and news surrounding the Gunners. There are some interesting headlines today, so without further ado, here is the Arsenal Transfer News Roundup. 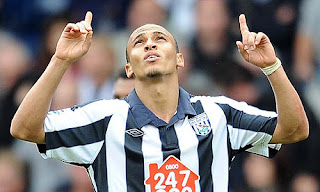 The main headline today, as the ever-reliable We Are the North Bank, reports that Arsenal are keeping their eye and are interested in West Brom star and Nigerian international, Peter Odemwingie. The 29 year old has had a highly impressive debut season in the Premier League, scoring 15 goals to keep his club in the Premier League for another season. Do I believe this headline? Yes, I do as We Are the North Bank were the first to report the news on Alex Oxlade-Chamberlain and have proven to be a very reliable source. His value is set at around 6 million pounds and I believe that he can be a good signing for the Gunners, if Wenger is serious about acquiring him.

Here’s a video displaying his talents:

Interesting news indeed, Anderlecht star and Belgian international, Romelu Lukaku has made a statement saying that he will leave Anderlecht and is on his way to the Premier League, to one of the top clubs. The 19 year old is one of the best youngsters and rising stars in Europe, with his physical attributes and scoring record, draws comparisons with Chelsea star Didier Drogba. I believe that Lukaku will be a great signing to whichever English club he signs for. His value is set around 12.3 million pounds, but I believe he’ll leave for a value a bit higher than that, probably around 15 million pounds. I’m sorry, but did I just read that? Willian, is now valued by the press at just 5 million pounds?! A few weeks ago, the press valued him at 22 million?! What did he do to lower his value at a high rate? Did he put in Denilson-like performances lately?! Seriously though, the press need to start to show consistency with their reports because this is just ridiculous. According to transfermarkt.co.uk, his transfer value is set around 13.2 million pounds. He’s a talented and skillful player, he could be a signing for the Gunners.

Feyenoord want to keep Miyaichi for another season

It looks like Japanese rising star, Ryo Miyaichi, who has been a huge success on loan with Feyenoord in the Eredivisie, is unsurprisingly wanted by the club for another season. With their technical director, Martin Van Geel, trying to persuade Wenger to have Miyaichi, play for one more season with Feyenoord. I’m undecided in my opinion on this, as in one hand I’d love to watch Miyaichi finally play in an Arsenal shirt, but I believe that one more season, playing regular football would do him the world of good. It looks like, though, that Wenger thinks that he’s ready to play in an Arsenal shirt and is working on a work permit, so hopefully we see this huge talent in an Arsenal shirt next season.

This is certainly interesting and intriguing news, which was brought up by a journalist named Marco Silva through Twitter, who I think you might have heard of. Silva, states that he has many connections and sources all over the world and that Arsenal will reveal a new signing by the end of next week. I’m not sure about this one, but I do hear that he’s usually reliable, so let’s just wait and see…..

What do you think? Should Arsenal sign Odemwingie? What do you think about the rumors regarding Morata and Willian? Do you think that Lukaku will sign for Arsenal? Do you believe in the statement made by Marco Silva? If you do, who do you is this mystery signing? Do you want Miyaichi loaned back for one more season with Feyenoord? Please share your thoughts and opinions.