Advisor: “Modric will not go to Manchester United” 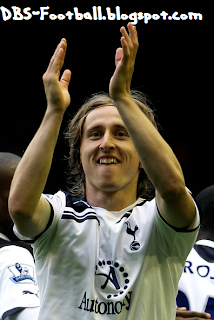 Replacing Paul Scholes comes at a price. His 17 seasons of service at Manchester United are now proving very difficult to replace for Sir Alex Ferguson who faces a dilemma in his transfer targets, especially when his two prime targets to replace Scholes seem unavailable and viewed as priceless by their respective clubs. Modric and Sneijder are the two men prominently linked with United, charged with the job of stepping into Scholes’s influential and game changing boots, but as they remain such important players in Tottenham and Inter Milan’s squads, it really will be a hard job for United to prize them out of the clubs grasps.

With speculation rife at this point of the year, it is unsurprising that there will be inaccuracies in reports, with the recent report that Tottenham would allow Modric to leave for £20 million. This seemed highly unlikely, in fact it seemed an impossible thought to think that the Tottenham chairman Daniel Levy would even consider this price, especially when you take into account that the club bought him for only £3.5 million under that. I would imagine that if Tottenham were to sell, it would be double the £16.6 paid for him in 2008.

Luka Modric’s advisor, Mario Mamic, who it is assumed has insider knowledge behind the scenes at Whit Hart Lane, especially involving Modric is highly doubtful of any transfer taking place. He believed Modric will stay at Tottenham this summer, especially when the rumoured £20 million bid is being circled, which he describes as “peanuts”. He told a Croation newspaper:

“Luka will not go to Manchester United and he will also stay at Tottenham because I know that president Daniel Levy.”

“I heard that somebody has offered £20m pounds for Luka but that’s crazy. When we talk about Modric, that price would only be enough to buy peanuts.”

Pretty conclusive if you ask me, and despite managers always reluctant to let go of their best players, Harry Redknapp, the Tottenham manager has not broken the code by absolutely denying that he will be allowing his top players go in the summer. Gareth Bale and Sandro who have also been linked to top clubs with big money, are not going anywhere according the Redknapp who insists that Spurs are not a selling side, but instead want to build a team to challenge for those top places. He said:

“If we’re going to push on as a football club we need to keep them players and we need to add one or two other top players to them if we’re looking to have a chance of ever getting back in the Champions League again.”

He also found the prospect of selling Modric for £20 million ridiculous. In fact the Spurs manager would not put a price on the player at all, which is understandable, as the news would be all over it and everyone would suddenly consider Modric up for sale and so on. He does not want to sell his top player, end of:

“So we’re not looking to sell them players – that would be a massive backward step for the club. £20 million for Luka? They’ve got to be dreaming, he’s such a fantastic player.”

“You know, we’ve enquired about players and we’re getting quoted more than that for people that couldn’t lace his boots so it’s not a goer. I wouldn’t put a value on him, I wouldn’t want to sell him. He’s one of those boys every day you come into work for me, and that’s what it’s about now.”

United will either have to up any bid significantly for Modric or have to find a new target to chase. No deal seems close at all, so Sir Alex Ferguson’s search for the replacement continues.