Is This Player The Answer To Chelsea’s Midfield Problems? 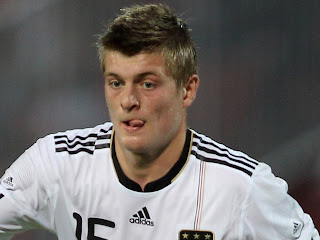 Chelsea have been linked with many playmakers recently, namely Luka Modric of Tottenham, Wesley Sneijder of Inter, and even Joao Moutinho of Andre Villas Boas’ former club FC Porto. While the talks of Sneijder (related to Chelsea) have died out in the recent times, the rumors of Modric and Moutinho are gaining  momentum with Chelsea. While the media speculate about them, one of my friends, Manas Agrawal gave me an article, about a player with whom we are not being linked with in the media. His views about Bayern Munich midfielder, Toni Kroos are:

“After winning the golden ball award in the U-17 FIFA WC 2007, bagging 5 goals and the bronze boot award, he was well identified as the perfect replacement to Bastian Schwiensteiger.

Already plying his trade with the Bavarian giants Bayern Munich, he was sent to Bayer Leverkusen for a loan spell, which turned out to be very fruitful. He is an attacking midfielder, who also prefers to play in the defensive midfield both at club and country. Called up for WC 2010 senior squad, he also featured as a sub to his mentor, Bastian Schweinsteiger. A kind of player, who is much needed at Chelsea.

An ideal fill in to the void of a fast and creative player at the club. He has been off form lately  at club level but it is just a matter of time before this 21-year old carries another young German team to glory.”

Well, Modric, Sneijder or Moutinho are definitely the players we need at this moment. We really lack creativity in front of the goal. Those above 3 players cant come cheap, and their clubs will not let us have them so easily. I think that Sneijder wont move from Inter, but Modric or Moutinho can leave their respective clubs if we submit an appropriate bid.

Modric may have the Premier League experience, but Moutinho can be more judged by Andre Villas Boas, as he was at Porto under the 33-year old. So, if we buy Kroos now, it will be a rather unusual type of signing, as he is not currently on top of his form, but still in the end he is a German, and he has got the talent to be a success at Chelsea. He is younger than those players, and he will come at a much cheaper rate, than those players with whom we are linked now. But we can expect a tough stance from Bayern too. If we do bid for Kroos in the future, and Bayern asks for an abnormal amount, then I think its better to not to go after him.

Toni Kroos is much like Bastian Schweinsteiger, as he plays pretty much in the same way as the German vice-captain. He has the strength to offer Chelsea, the stability in the midfield and with his defensive efforts he can cut out many attacks. But considering our situation, we need creativity more than solidity in the midfield. We are not creative enough, and that is why Manchester United had exposed loopholes in our midfield in the last three encounters with them, as we have become predictable to our opponents. Michael Essien was poor last season, and according to many Chelsea fans, he has lost his ability. If we sell Essien, then we can replace him with Kroos. I see Kroos as a replacement to Essien more than as an answer to our ‘midfield creativity’ problems.