Watch as Arsenal midfielder Thomas Rosicky appears to smirk and turn away BEFORE Seb Larsson’s free kick hit the back of the net during Saturday’s 2-1 win at the Emirates. 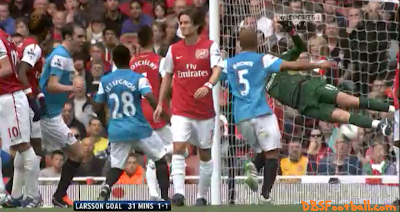 As Sky showed the replays of Sebastian Larsson’s wonderful free-kick goal against Arsenal over and over again from various different, high definition camera angles, one angle showed an image of the Arsenal midfielder Tomas Rosicky, with his back to the net, knowingly walking away from the goal. He knew Sunderland had scored, and he didn’t want to turn around to witness them celebrate the goal.

However, questions were immediately asked of the 31 year-old’s reaction to Arsenal’s conceded goal on Sunday. Some even thought he was laughing at the incident, but Rosicky has moved to clear his name from criticism, saying:

“I was laughing? That’s not laughter because when he took the ball immediately I was thinking about when Rooney scored at Old Trafford. That wasn’t a laugh – it was a desperate laugh that such a screamer would be scored again.”

Asked if he thought the ball was goal bound as soon as the Swedish and former Arsenal midfielder, Larsson hit it, he said:

“Yeah, exactly. I don’t have to turn around. When I see his face and he is celebrating, why should I? Anyone who thinks I would laugh at that… it is very disappointing. For people to take it that way is unbelievable.”