Chelsea vs Liverpool – match preview including predicted line-up and key stats as former Red Fernando Torres faces his former side.

Chelsea vs Liverpool – Guest post submitted by Chelsea FC News:  Its a Super Sunday for both Chelsea and Liverpool.  Chelsea go into this game with a hard fought win against struggling Blackburn Rovers at Ewood Park. A solitary goal from Frank Lampard ensured Chelsea got back to winning ways after back-to-back defeats to QPR and Arsenal.

Liverpool had to settle with a frustrating goalless draw against Swansea, a game which Liverpool should have won but were denied by the heroics of Swansea keeper Worm. Liverpool are on an eight-match unbeaten run but still find themselves outside of the top four due to some frustrating draws against newly promoted teams.

Both teams (Chelsea & Liverpool) are separated by three points with Chelsea 4th and Liverpool 6th in the League table. A win for Chelsea (if Newcastle lose to Man City on Saturday) will take Chelsea back into the 3rd spot ahead (level on points) of impressive the Newcastle United side. But if Chelsea lose to Liverpool and if Arsenal and Tottenham win their respective games then Chelsea could find themselves in 7th place in the League table.

All eyes again would be on one man FERNANDO TORRES. It was Nando who scored twice against Chelsea for Liverpool last season, the season where Liverpool did the double over Chelsea with yet another former Red Raul Meireles on the score sheet as well.

To be frank Torres hasn’t fired so far for Chelsea (just three goals in English Premier League since Jan move) and nobody knows it better than the player himself. We want Torres to be back in the fluent form he showed in his days at Liverpool, its not that he hasn’t shown those glimpses of form…its just that it hasn’t been consistent and full of confidence. This game will surely provide that much needed hunger to prove his worth and to show that he can reach the performance level he reached during his time with the Reds, and previously with Atletico Madrid.

In his recent interview he stated that he is determined to repay supporters by getting back to his best.

“Whenever you go somewhere new, you expect to have difficulties, But whenever I have had difficult times, I look at myself and say, ‘Yes, I can get back to my level.”

“All that I need to do, above anything else, is to work. If you work and give everything and really want to do something, that is all you can be asked.”

“But I am in debt to the Chelsea fans. They have always supported me. And I promise them the one thing I have never done and will never do in my life is give up.”

So this is a crunch game for Andre Villas Boas’ side. A game where three points will not only potentially take us in to the top 3 but also give the much needed boost in confidence which we seem to be lacking of late. It wont be an easy game given the squad Kenny Dalglish has at his disposal.

My Chelsea starting line up would be 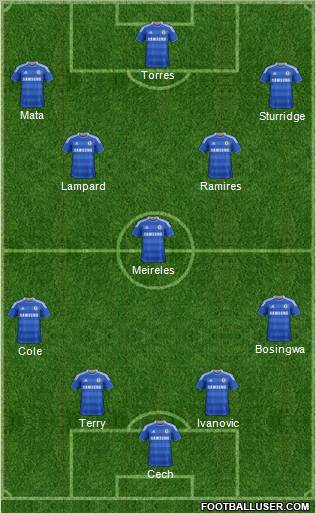 The three Liverpool goals against Chelsea last season were scored by Fernando Torres (two) and Raul Meireles, both now at Stamford Bridge.

Chelsea v Liverpool in all competitions

Head to head in the League at Stamford Bridge

Biggest league win at Stamford Bridge for each team

Liverpool are on an eight match unbeaten run since their 0-4 defeat at Tottenham on 18th September. Only Newcastle United have conceded fewer than Liverpool’s 10 goals. The Reds boast the third best defence away with only five goals conceded in five games. Liverpool have won nine points from 15 away from home this term with wins at Arsenal, Everton and West Brom and defeats to Stoke and Tottenham.