Arsenal 1-2 Chelsea: Blues top of the class as they blast Gunners

Chelsea extended their lead at the top of the league after an early afternoon derby against London rivals Arsenal saw them snatch a 2-1 victory. Match report 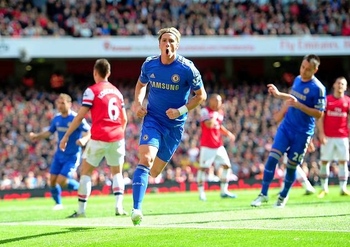 Chelsea extended their lead at the top of the Premier League after an early Saturday afternoon derby against London rivals Arsenal saw them snatch a 2-1 victory.

Roberto Di Matteo’s side travelled the short distance across the capital to The Emirates where two goals from Fernando Torres and Juan Mata either side of a Gervinho strike was enough to consolidate their first placed league standing. The win also extended the Blues unbeaten start to the 2012-13 campaign, a run which has confirmed many players and pundits’ prediction that Chelsea are serious title contenders.

John Terry- who has been in the media spotlight this week having been found guilty of racially abusing QPR’s Anton Ferdinand- started the game despite being handed a four match ban on Thursday and fined £220,000 by the FA. The Chelsea skipper came in for defender Gary Cahill in their only change to the one that started last weeks 1-0 victory over Stoke City. Di Matteo fielded an attacking line-up, making clear his intentions to win the game in style as the visitors took a deserved lead inside 20 minutes.

A fairly low-key opening saw just one chance between the sides before Torres’ opener. Gervinho, in fine form following a flurry of goals, looked to be taking the initiative for his side but it was Abou Diaby who tested Petr Cech with a fierce effort. If Arsene Wenger was disappointed to have to withdraw the Frenchman through injury, he would be dismayed moments later as Chelsea took the lead. A deep free-kick was enough to cause panic inside the home sides penalty area and it was Torres who capitalised on Laurent Koscielny’s uncertainty, guiding the ball beautifully on the volley past ‘keeper Vito Mannone.

Arsenal have blushed with the flurry of praise thrust upon them this season; praise for a solid defence that had conceded just three goals before Chelsea’s visit to the Emirates. But there was only the red-rouge blush of embarrassment for Arsenal after Torres was allowed to profit from some lazy defending. And Torres came close to a second moments later as the Spaniard raced clear. Cutting into a central position square of Mannone’s goal, Torres failed to make contact with the ball instead comically swinging through air and tumbling to the ground much to home fan’s amusement. The striker claimed he was tripped by Koscielny but referee Martin Atkinson judged that no contact was made. The Arsenal defender wasn’t the only one left embarrassed.

Had Torres netted his second of the day, the game may have set off on a different course. As it happened, Arsenal re-grouped and started to advance on Petr Cech’s goal, show-casing that deliciously slick brand of football that has become synonymous with Wenger’s side. Gervinho went close with a header before parity was restored. The influential Mikel Arteta threaded the ball down the right flank for Alex Oxlade-Chamberlaine who centred for Gervinho. The Ivory-Coast international controlled with his back to goal, and managed to find enough space in the crowded area to turn and fire an emphatic finish high past Cech.

The creative Santi Cazorla shot wide soon after the break as the Gunners began the second 45-minutes brightly but they were once again undone from a set-piece; Koscielny in particular contributing to Arsenal’s defensive frailties. In the past, criticism for their back-four has often come on the back of a one-man battle from the dominating Didier Drogba, who bruised and tormented Arsenal’s rear-guard for years. However it was basic positional play that will have Wenger and assistant coach Steve Bould fuming as Chelsea regained the lead.

Mata’s angled free-kick after Torres was brought down took a slight nick off Koscielny as it evaded everyone, including the stunned Mannone, and settled into the back of the net. Whilst Arsenal’s management fumed on the sideline, Chelsea’s were jubilant as they looked set to take all three points against arguably their toughest test this season.

With just under 30 minutes left to play, Wenger rang the changes introducing contract rebel Theo Walcott for Aaron Ramsey and striker Olivier Giroud for Lukas Podolski; the German’s last significant contribution being a headed effort which was brilliantly saved by Cech. Arsenal laid siege to the Chelsea goal, sensing an equaliser but Chelsea were resilient where Arsenal had been complacent. Cech was again on hand to palm away a deflected effort from substitute Giroud and in the final minutes of the game the Frenchman looked certain to equalise as he raced clear of the Chelsea defence and rounded Cech. However the Czech ‘keeper did enough to force him wide and Giroud found the angle too tight, firing his shot into the side netting.

Chelsea may not have dazzled in their first ‘test’ so far this season however they passed the exam, showing the colours of champions who can win without necessarily being at their best. There will be tougher tests to come over the course of the season and not many teams will gift them the  goals that Arsenal did but for now they can be pleased to have made it to the top of the class. And they look like staying there.