Chelsea continue the defence of their FA Cup trophy when take on League 1 outfit Brentford in the fourth round this Sunday. Here’s a preview for the big game.

Chelsea continue the defence of their FA Cup trophy when take on West London rivals Brentford in the fourth round this Sunday.

The Blues will obviously go into the game as red-hot favourites but the League 1 outfit will smell a giant-killing at Griffin Park this weekend.

Chelsea saw their hopes of reaching Wembley in the Capital One Cup dashed on Wednesday night when they crashed out 2-0 on aggregate to Swansea and Brentford will be hoping they can inflict another cup surprise on the European champions.

However, they will have a tough task on their hands as Chelsea boast an incredible FA Cup record in recent years having won the trophy four our of the last six seasons, including last year when they beat Liverpool 2-1 in the final.

Chelsea interim boss Rafa Benitez will be without defender David Luiz after the Brazilian aggravated an ankle injury after coming on as a late substitute against Swansea in midweek.

Attacker Eden Hazard will also be missing as he starts a three-match ban after being sent off for violent conduct after appearing to ‘kick’ a ball-boy at the Liberty Stadium.

However, captain John Terry is back in contention and could start after recovering from a knee problem and he may play alongside Gary Cahill at the back. Fernando Torres is expected to come in for Demba Ba up front.

John Obi Mikel and Victor Moses are away with Nigeria at the African Cup of Nations, while  Yossi Benayoun and Oriol Romeu are both ruled out with knee injuries. 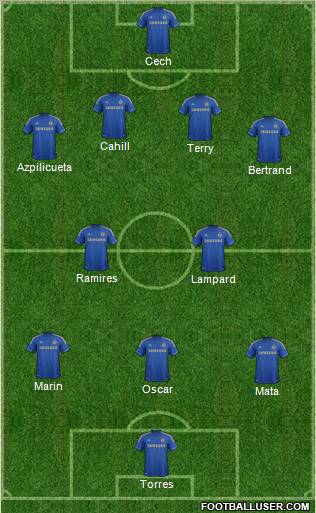 The gulf in class should be evident this Sunday, but as we know football is rarely that simple. Chelsea have been inconsistent under Benitez and Brentford are doing well in League One – currently sitting third in the table. But if Chelsea apply themselves and put in a professional display, they will win the game. Brentford 0-2 Chelsea