Wayne Rooney scored a hat-trick as Man Utd closed the gap on Chelsea to 2 points with a 4-1 win at Fratton Park. But Portsmouth’s first half display will give Avram Grant hope.

Wayne Rooney scored a hat-trick as Man Utd closed the gap on Chelsea to 2 points with a 4-1 win at Fratton Park. But Portsmouth’s first half display will give Avram Grant hope. 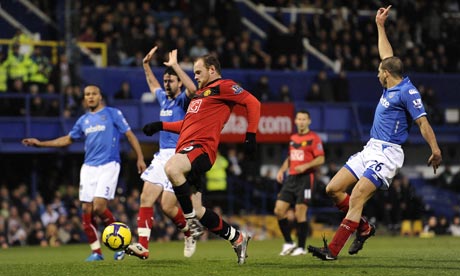 Avram Grant might have wished for an easier start to his Portsmouth managerial career as his side entertained Manchester United. With Sir Alex Ferguson watching from the stands, Portsmouth started brightly but is was Utd who had the first chance of the game. Scholes firing over from Giggs’s pass straight from a corner. Pompey hit back with stand-in keeper Thomas Kuszczak making a brave block with Dindane closing in. United were being given a stern test as Portsmouth enjoyed much of the game during the opening stages of the first half. With striker Dindane firing wide from long distance before O’hara’s cross found him unmarked, but he headed tamely wide. O’hara also had a header tipped over by Kuszczak following Piquionne’s cross.

Despite Portsmouth’s pressure it was United who took the lead on 25 minutes. After good work from Valencia down the right, he found Rooney who was felled by Brown in the box. Rooney picked himself up and slotted home the penalty to give United the advantage. But Portsmouth were level within 5 minutes when Vidic was adjudged to have pulled Piquionne’s shirt inside the box.  Boateng was given the chance to make up for his penalty miss against Stoke the previous week, and he did just that smashing home the spot kick to level the match 1-1. It was Pompey who were pressing for the second before half time but the teams went in at the break level.

United came flying out of the blocks in the second half and took the lead after just 3 minutes. Giggs perfectly weighted ball found Rooney in the box and he dispatched it for his 10th of the season. Rooney didn’t have to wait long for his hat-trick when on 54 minutes Piquionne fouled Giggs inside the box. Rooney stepped up and sent Begovic the wrong way to seal his hat-trick. Pompey pressed to get back in the game and Boateng could have grabbed his second but blazed over when in a decent position. A day short of his 36th birthday, Ryan Giggs added a superb free-kick to his collection 3 minutes from time to seal the game for United.

It was an entertaining game which may have turned out differently had Diadane had his shooting boots on in the first half. But United came away with 3 points after taking their chances and avoiding a potential banana skin on the South Coast. Ferguson’s men will now be looking a draw in Sunday’s match at the Emirates, as they closed the gap on Chelsea to 2 points.

Leave your thoughts below….