Arsenal take on relegated Queens Park Rangers on Saturday evening at Loftus Road. Here’s the latest team news and a predicted Arsenal line-up for the game.

Arsenal take on relegated Queens Park Rangers on Saturday evening at Loftus Road looking to reclaim third and put ourselves back in the driving seat for Champions League qualification.

It looks like the race for a top four finish is going to go to the wire and with Chelsea visiting Old Trafford to face champions Manchester United on Sunday, this game presents a great opportunity for us to get back up to third and really put the pressure on our rivals.

Ahead of the game, boss Arsene Wenger has given Arsenal.com a team news update and confirmed that he has no fresh injury worries to contend with following on from last weeks 1-1 draw with Man Utd at the Emirates. Striker Olivier Giroud serves the second of his three-game ban so it looks like Lukas Podolski will continue up front.

Goalkeeper Lukasz Fabianski remains out with a rib injury meaning Wojciech Szczesny will once again get a chance to impress in goal. Here is what the boss told the clubs official website:

We still have Olivier Giroud suspended so, compared to last Sunday, we have everyone else available.

He is still unavailable. From next week onwards, he should be alright.

on the overall injury situation…

It is a good position. We have done well recently. Maybe we benefit from the fact there is only one game per week. So the squad is a bit more stable injury-wise.

So we have the same squad to choose from as last week and I think we might see a couple of changes to freshen things up. Nobody can deny Bacary Sagna had an afternoon to forget last week and I hope Carl Jenkinson is given a chance at right back. Sagna has been well below par in recent months and Jenkinson has performed well when called upon, so hopefully Arsene will give him the nod at right back.

Jack Wilshere may also start after only making the bench last weekend. He doesn’t look 100% fit but hopefully with a full weeks training under his belt he’ll be a little sharper on Saturday. The battle for the left back berth is an interesting one and I think Wenger will continue his recent trend of rotating Kieran Gives and Nacho Monreal, with the Spaniard coming in this weekend after being left out against United. Here’s the team I’d like to see start the game: 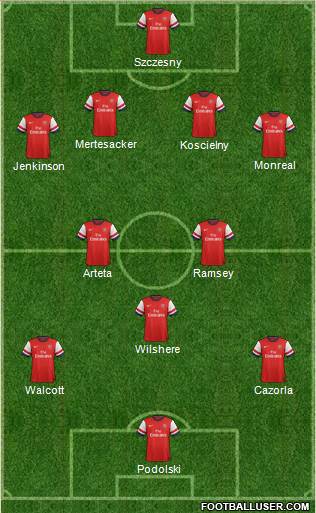 Huge game this weekend Gooners. I’ll have my full match preview up on Friday at some point. Till then….

What would be your preferred starting line-up for the game? Leave your suggestions in the comments section below.