Arsenal get back to action tonight as we take on Fenerbache at the Sukru Saracoglu stadium for the first leg of our Champions League play-off. Here’s a preview.

Arsenal get back to action tonight as we take on Fenerbache at the Sukru Saracoglu stadium for the first leg of our Champions League play-off.

It’s been a terrible summer for Arsenal and fans frustrations boiled over when we were beaten 3-1 by Aston Villa on Saturday. Arsene Wenger rightly took the brunt of it due to his inactivity in the transfer market but we need to put all that behind us tonight for this vital clash.

We’ve got an excellent record in the Champions League play-offs but Fenerbache are going to be tough opposition with several former Premier League players in their ranks. The likes of Dirk Kuyt, Joseph Yobo, Raul Meireles and Emre are all expected to start along with the dangerous Moussa Sow, so we can’t afford to take anything for granted.

The hosts have a two-year European ban for match fixing hanging over their heads but the appeal hearing decision wont be revealed until after the second leg. There is a possibility we could lose over the two-legs but be reinstated if their ban is upheld, but with UEFA refusing to confirm what will happen in the event that Fenerbache win but are subsequently thrown out until the result of their appeal if known, we just need to make sure we do our job and beat them.

The last time we played Fenerbache in Turkey we ran out 5-2 winners in 2008, so a repeat result tonight would almost certainly ensure we make it through to the group stages.

Unfortunately Alex Oxlade-Chamberlain is out with a knee injury that will keep him on the sidelines for between 6-12 weeks. The good news is that Bacary Sagna, Aaron Ramsey, Tomas Rosicky and Keiran Gibbs have all travelled after picking up knocks at the weekend.

Sagna is facing a late fitness test after falling on his neck against Villa while Gibbs is also a doubt after receiving a nasty cut above his eye. Nacho Monreal is back in the squad in-case Gibbs is ruled out.

Thomas Vermaelen, Mikel Arteta and Abou Diaby are all on the injury list meaning that the likes of  Emmanuel Frimpong and Serge Gnabry are part of the squad. Our only summer signing, Yaya Sanogo, is also in contention.

Santi Cazorla could return to the starting line-up but I think Arsene Wenger will go with Lukas Podolski to replace Oxlade-Chamberlain as the little Spaniard looked well off the pace when he came on at the weekend. 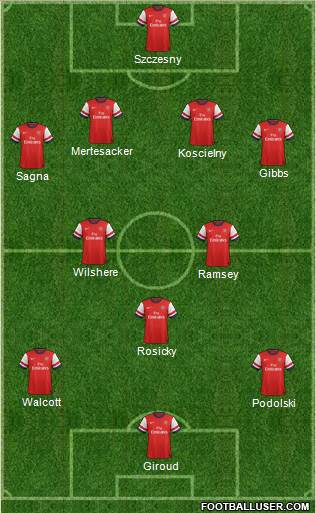 Fenerbache 1-2 Arsenal: I’m backing the boys to respond in positive fashion after the weekend’s disappointment and grind out an important away win.

What would be your starting eleven and what’s your score prediction for the game? Share your views below.