The two teams are level on points after both winning their opening fixture 2-1; Arsenal beating Marseille away while Napoli beat 10-man Borussia Dortmund in Naples.

Arsene Wenger confirmed the good news yesterday that Tomas Rosicky is back in the squad and in contention to start. The Czech midfielder hasn’t played in a month after injuring his thigh while away on international duty in September, so his return is a huge boost for the club.

However, he’s only had 2 days training and is unlikely to be match fit yet so I think he should be used as a second half substitute. Serge Gnabry deserves to keep his place after an excellent display against Swansea and although he’s played a lot of football lately, he’s a young lad who looks big enough and strong enough to cope with another game before getting a well-earned rest against West Brom on Sunday.

I really don’t see the need to make any other changes to the line-up. We’re settled and on an excellent run so why change things now?

None of the players deserve to be dropped so I think we should stick with the team that beat the Swans and then potentially make a couple of changes at the weekend with Arteta and Rosicky coming in. It’s great that we’re starting to get some options back and the boss can start to think about rotating again. 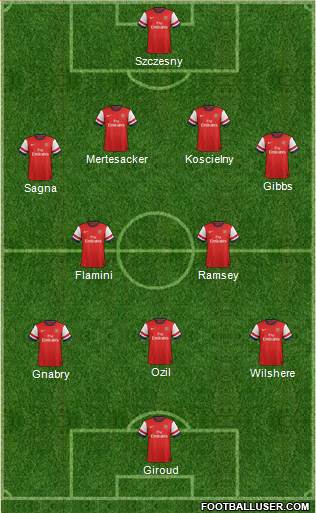 What do you think of my line-up? What would your be? Leave your suggestion below.