Arsenal make the short trip across London to take on Crystal Palace at Selhurst Park on Saturday lunchtime. Here a predicted starting line-up for the game.

Arsenal make the short trip across London to take on Crystal Palace at Selhurst Park on Saturday lunchtime.

The Gunners head into the weekend action sitting two points clear at the top of the Premier League table so will be hoping to at least maintain that advantage with a win over struggling Palace.

Arsene Wenger’s men tasted defeat for the first time in 12 games on Tuesday as Borussia Dortmund ran out 2-1 winners thanks to a late Robert Lewandowski strike. But despite the loss, I don’t see the boss making too many changes to his starting line-up this weekend.

Mathieu Flamini is almost certain to return after missing the game on Tuesday with concussion. Wenger has opted for a central midfield pairing of Flamini and Mikel Arteta in recent weeks so Aaron Ramsey could be moved out to the right wing again.

Jack Wilshere is a doubt with an ankle knock having been taken off against Dortmund, so I’d expect he’ll only make the bench tomorrow meaning Santi Cazorla should come in on the left after making an excellent impact when he came on in midweek.

With the Capital One Cup fixture to come on Tuesday, I think the boss will stick with his first team this weekend before making some changes for the visit of Chelsea. So here’s the team I think he’ll go with to face Palace: 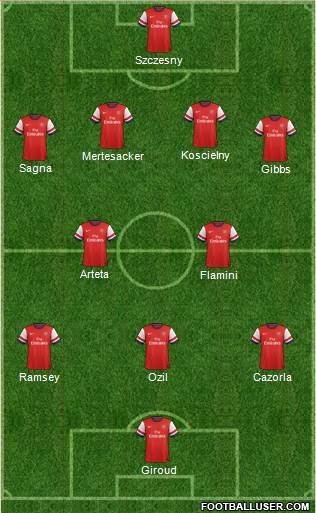