Man City rack up seven against Norwich, Utd’s strikers provide the goods, and Arsenal extend their lead at the top. Do you agree with the Team of the Week?

We are now over a quarter of the way through the current Premier League season; doesn’t time fly! Having reached the ten game mark, it is Arsenal who continue to lead the way. The Gunners opened up a five point lead at the summit following their impressive 2-0 win against Liverpool on Saturday.

Brendan Rogers’ side remain second, despite the defeat, equal on points with Chelsea, themselves beaten convincingly by a revitalised Newcastle at St James Park. Tottenham joined them on the 20 point mark on Sunday, after their dour stalemate at Goodison Park against Everton.

The Manchester boys were the talk of the town this weekend after scoring 10 between them, lighting up the league in separately devastating attacking displays. City racked up seven without reply against a desperately poor Norwich; while Utd continued their Premier League ascent with a 3-1 away win at Fulham, dominated by their attacking duo of Van Persie and Wayne Rooney.

Here is the ‘Football-Talk’ Team of the Weekend for Gameweek 10:

Yet another clean sheet for the cat-like Frenchman, and it was achieved after a bizarre incident that has had fans and pundits simultaneously praise his bravery, and Spurs boss Villas-Boas’ foolhardiness.

Having come to snatch a bouncing ball away from Everton behemoth, Romelu Lukaku in the second half, Lloris cascaded into the Belgian’s up-swinging knee, knocking him clean out. Such was the blow that Lukaku had to be substituted and sat pushing ice on his tender knee.

After lengthy treatment, Lloris got to his feet and continued, unfettered. A semi-conscious goalkeeper surely is not worth the risk, but his passion to the Tottenham cause will surely consolidate what is an already high opinion of him amongst the Spurs faithful.

A recent regular in my Team of the Week, the Frenchman once more worked his socks off for the Arsenal cause. Up against the free-flowing trickery of Liverpool’s ‘SAS’ strike force, Sagna had time enough to bombard down the right flank, and set-up Cazorla for the opening goal with a cross on the run. Another three points; another clean sheet; and yet another solid performance from Sagna.

The young centre-back stepped up to the plate this weekend after last week’s horror moment with the deposed Joe Hart against Chelsea. The Serb was comfortable throughout the Norwich game, and scored his first Premier League goal for City from a first half corner. In the absence of Vincent Kompany, performances like this will be exactly the tonic needed for Pellegrini and Man City.

Stopping Suarez and Sturridge has been a tall order for many Premier League defences this season, but Mertesacker, for all his size and mythical sluggishness, contained the duo expertly on Saturday. Apart from a few hairy moments, the German and the rest of the Arsenal backline performed admirably, and laid the foundations for Arsenal’s ghost-like attackers to exact the damage on Liverpool’s ill-advised, three-strong backline.

Deployed at left-back for Spurs at Everton on Sunday, Vertonghen careered down the flank all game, offering valuable attacking potential. Crucially, the Belgian gave very little away at the back, and was the consummate attacking defender on the day. The clean sheet was ample reward for him, as was his deserved ‘man-of-the-match’ award.

A fantastic, disciplined display from the experienced Spaniard, Arteta was called upon by Wenger to fill the troubling void of defensive engine following the injury to Mathieu Flamini. Last week, Ramsey excelled in the role; this week however, against markedly more ominous opponents, Arteta was the man to earn the rave reviews. The 2-0 win puts the Gunners in a comfortable position at the top, ready for the daunting fixture list to come.

The second of three Spaniards selected in my midfield, City’s little magician had a field day at the Etihad on Saturday. Lackadaisical play from the visitors allowed City the freedom of the pitch, and Silva is certainly one who thrives when given time and space. One goal scored, and two crucial passes led to two further goals as City ran riot, netting seven times, sending a warning to the leading pack.

A little like Juan Mata’s predicament at Chelsea, Arsenal’s former mega man, Cazorla, has seen the spotlight deviate since the arrival of Mesut Ozil from Madrid. The Spaniard was on top form on Saturday however, with an opener that showed off his obvious ability. Finishing high from a tight angle, his goal set Arsenal on their way to yet another win, this time against top opposition. The football on display from the Gunners at the Emirates was breath-taking at times, and Cazorla was very much a part of that. Such interplay will be hard to quell, regardless of the strength of the opponent.

Utd’s maverick striker, Rooney, made headlines for the wrong reasons during the summer. Stories of his apparent dissatisfaction at playing second fiddle to Van Persie detracted from the obvious talent the England man possess when on form. That form was fully on show against Fulham at Craven cottage on Saturday, as was an understanding with his Dutch counterpart that will have had David Moyes beaming to the rafters. Rooney scored one, and set up another in what was a devastating double act from Utd’s two main men.

Along with Aaron Ramsey and Luis Suarez, Aguero is the best player in the league at the moment. With seven goals and five assists in his last five Premier League games, the Argentine is more than justifying the faith put in him by Pellegrini. He ran Norwich into the ground on Saturday, setting up three goals, and netting one himself. There was no stopping Aguero, and on such form, one wonders who can?

The second barrel of Man Utd’s potent striking blunderbuss, Van Persie matched his England strike partner with a goal and assist. His goal was of such effortlessness, yet of such devastating precision; something we have become accustomed to from the best striker in the league last year. While Aguero and Suarez have been tearing up the turf in their respective quest to be the leading Premier League striker, none can deny Van Persie’s class and ability, and that he will surely be one of the front-runners come the close season. 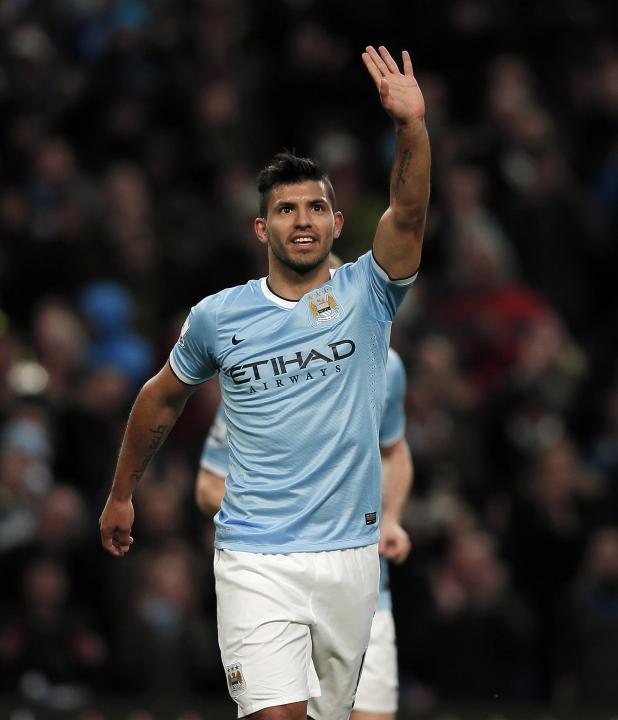 Goal of the Weekend: Aaron Ramsey vs. Liverpool

What do we think? Is there a better effort worthy of Goal of the Weekend? Any objections as to the team selection? Let me know in the comments below!