Arsenal take on Borusssia Dortmund tonight in a crucial Champions League group game. Here’s the team Arsene Wenger is likely to go with for the match.

Arsenal take on Borusssia Dortmund tonight in a crucial Champions League group game looking to avenge defeat at the Emirates two weeks ago.

The German side ran out 2-1 winners in north London thanks to a late Robert Lewandowski goal to leave Group F wide open with Napoli joining Arsenal and Dortmund at the top on six points.

Arsene Wenger is likely to stick with the majority of the side that beat Liverpool 2-0 on Saturday. Kieran Gibbs has travelled with the squad despite being forced off with a calf injury at the weekend so he should take his place in defence alongside Laurent Koscielny, Per Mertesacker and Bacary Sagna.

Mathieu Flamini is still recovering from a groin problem so misses out once again while Jack Wilshere is sidelined with an ankle injury and is a doubt to face Manchester United on Sunday. This leaves Aaron Ramsey to partner Mikel Arteta in the center of midfield.

Santi Cazorla and Mesut Ozil are almost certain to start in attack and are likely to be joined by Tomas Rosicky with the likes of Theo Walcott, Alex Oxlade-Chamberlain and Lukas Podolski all still unavailable. Serge Gnabry is fit and in contention while Olivier Giroud will spearhead the attack.

Here’s the team Wenger is likely to go with: 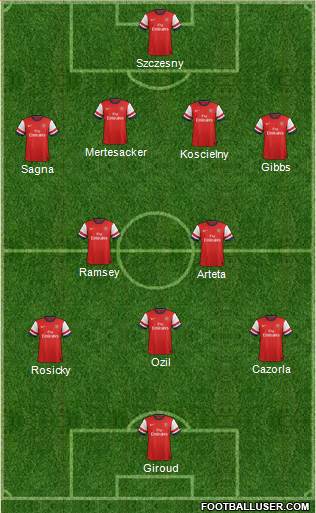 Do you think this is the team Wenger will select? Share your views below.