Group F leaders Arsenal take on Marseille on Tuesday night hoping to secure their place in the last 16 of the Champions League. Here’s our predicted team.

Group F leaders Arsenal take on Marseille on Tuesday night hoping to secure their place in the last 16 of the Champions League.

The Gunners can ensure they are in the draw for the knockout stages with a win as long as Borussia Dortmund don’t beat Napoli in the groups other fixture.

Arsene Wenger was in front of the media earlier today and gave the latest team news, with the boss confirming that the team suffered no fresh injuries from the weekend win over Southampton.

Mathieu Flamini returns to the squad after serving a one-match ban and he could come back in to the team alongside Mikel Arteta. The Spaniard was forced off late on against the Saints but it seems he’s not suffered any injury and is available tomorrow.

Theo Walcott come off the bench on Saturday but Wenger has confirmed he’s going to be cautious with the winger so I expect he’ll be among the subs again, meaning Aaron Ramsey may start on the right side of midfield.

Jack Wilshere is likely to be the one to drop out as he played the full 90 minutes at the weekend which came off the back of featuring in both of England’s friendlies, so I think he’ll get a rest.

The rest of the side should remain as it has for much of the season, so here’s my predicted line-up: 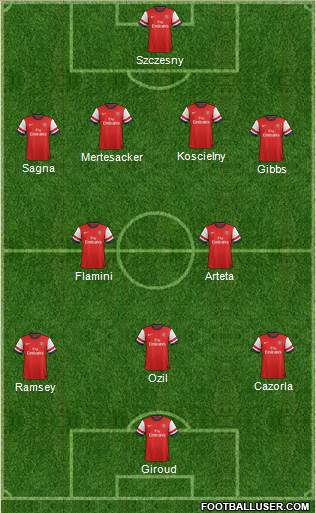