Arsenal will be in Wales on Saturday to take on Cardiff City looking to extend their lead at the top of the Premier League. Here’s our predicted line-up.

Arsenal will be in Wales on Saturday to take on Cardiff City looking to extend their lead at the top of the Premier League.

The Gunners head into the game sitting four points clear but with none of their direct rivals playing until Sunday, the north Londoners have the chance to open up a seven point gap.

Arsene Wenger has confirmed that Kieran Gibbs is available again after missing the 2-0 win over Marseille through illness. He should come back in for Nacho Monreal at left-back, despite the Spaniard impressing in midweek.

Midfield is now a highly-competitive area but I think Mikel Arteta will be recalled to play alongside Mathieu Flamini in the middle of the park. Wenger seems to favour these two together, particularly away from home.

Jack Wilshere is almost certain to get a rest after starting his last two games games so we could see Aaron Ramsey moved out to the wing. Santi Cazorla is expected to be recalled in place of Tomas Rosicky in attack.

Theo Walcott is pushing for a start but may have to settle for a place among the subs again as Wenger cautiously  introduces him back into first team action following a lengthy injury lay-off.

Lukas Podolski is still a few weeks away from being n contention while we won’t see Alex Oxlade-Chamberlain until the New Year. 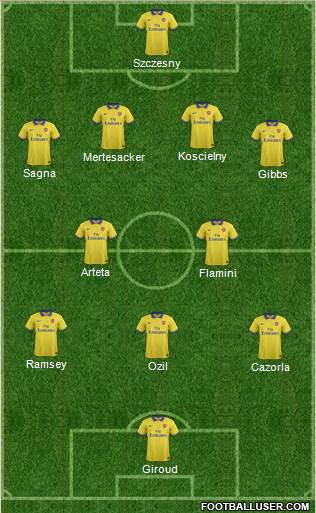 What do you think of the team? What side would you start? Leave your suggestions below.