As Arsenal prepare to take on Cardiff City this afternoon looking to extend their lead at the top, blogger Gooner Daily gives us his preview for the game.

As Arsenal prepare to take on Cardiff City this afternoon, blogger Gooner Daily gives us his preview for the game.

The Premier League is widely known for its unpredictability and a team like Cardiff City, 15th on the Premier League table with 13 points, is a living proof of the cunning nature of the most exciting league in the world. Manchester City arrived in the Welsh capital in bullish mode but they were humbled, Tottenham needed a late strike from Paulinho to secure a lucky 1-0 win, and the Welsh side salvaged a last-gasp equalizer against the defending champions last weekend.

Cardiff City have been incredibly reliant on set pieces this season but who can blame them? Manchester City were undone by two corner kicks superbly dispatched by Frazier Campbell and Kim scored from Peter Whittingham’s dead ball delivery right at the death last Sunday.

Whittingham is currently a stalwart at Cardiff, and he’s also the longest serving player at the club since his winter transfer to the Welsh capital in 2007. His deliveries have been a major factor in how Cardiff play and he has created 20 chances for his teammates this season. In Peter Odemwingie and Frazier Campbell, the Blue Birds have a potent strike force that could hurt the Gunners, and Odemwingie’s record against Arsenal isn’t bad, as he has scored two goals in his last three against the Gunners.

The teams have never met in the Premier League, and have not met in a league fixture for fifty-one years. In that time they have met in cup fixtures in which Cardiff have lost four of their last five. The Gunners are undefeated against the Bluebirds in their last eleven, a run that stretches back to 1961. The last three meetings between Arsenal and Cardiff have been in the FA Cup and Eduardo da Silva’s comeback game from injury came in a 4-0 demolition of the Blue Birds in 2009, where he scored a brace.

Cardiff have had a solid start to life in the big-time and are extremely tough to beat, especially at home. Against the top 10 they’ve won twice and drawn twice in seven games which is something the Gunners have to be mindful about. Only Manchester United and Aston Villa have gained more points from losing positions than Cardiff this season (five) and most importantly for the home side, three of Cardiff’s six home games this season have been decided by goals in the 87th minute or later (W1, D1, L1).

However, the Gunners arrive in confident mood after dispatching Southampton last week as well as a midweek Champions League victory over the group’s whooping boys, Olympique Marseille. The Gunners have the best away form in the division and the only game they failed to score was the 1-0 narrow loss to Manchester United a few weeks ago.

One player that’s obviously going to be in the spotlight is former Cardiff hero and local boy, Aaron Ramsey. Despite being in Arsenal for five years, Ramsey remains a Cardiff fan by heart and this was shown when he took out time to watch the Swansea vs. Cardiff Welsh Derby. Cardiff’s manager, Malky Mackay, also had some encouraging words for the Welsh man on fire,

“I hope he gets a great reception here and I am pretty sure he will. He is a fine young man, I met him a couple of weeks ago when the Welsh squad were here. He popped in and at that point I said to him to make sure that in a couple of weeks’ time he goes easy with us. It’s good to see a young British player grasping the nettle at Premier League level and actually being one of the main men at Arsenal.”

It’s worth noting that Ramsey has made more tackles (57) than any other player in the Premier League and his goal haul this season (11) has been a bright spark in Arsenal’s campaign thus far.

To injury news, Striker Rudy Gestede is out with a knee injury with no confirmed return date and however, the Chilean pitbull, Gary Medel, will be available for selection after the FA didn’t take any retrospective action on his altercation with Marouane Fellaini last weekend.

At Arsenal, the long-term absentees, Abou Diaby (Knee), Alex Oxlade-Chamberlain (Knee), Lukas Podolski (Hamstring), Yaya Sanago (Back) and Ryo Miyachi (Hamstring) are still out of contention but Kieran Gibbs will face a late fitness test from illness, even though it seems likely that Nacho Monreal will get the nod in such a game.

My expected lineup would be: 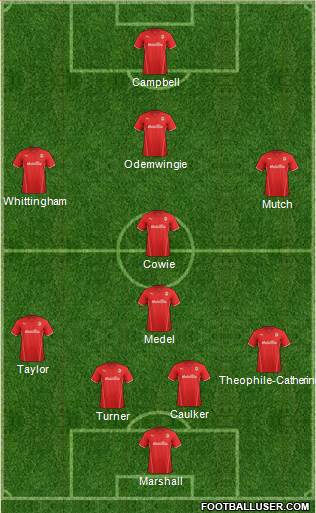 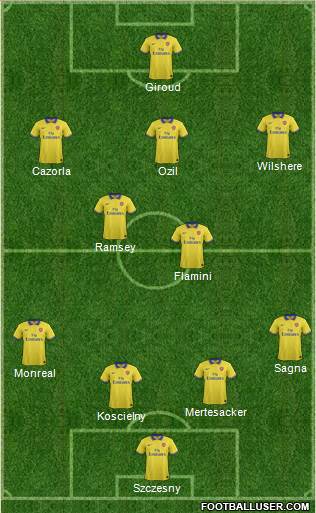 Enjoy the game wherever you are. And let’s hope that Arsenal hunts some Blue Birds.