Arsenal beat Cardiff City 3-0 on Saturday thanks largely to a brace from Aaron Ramsey. Here are some pre-match thoughts and player ratings from Gooner Daily.

Arsenal beat Cardiff City 3-0 on Saturday thanks largely to a brace from Welsh midfielder Aaron Ramsey. Here are some pre-match thoughts and player ratings from blogger Gooner Daily.

Arsenal visited the Welsh capital on a fine Saturday afternoon and went back to North London with three precious points. The manager played the game with a slightly changed team from the side that was victorious against Marseille with Mikel Arteta returning to the side to replace Mathieu Flamini while Kieran Gibbs was fit again to send Nacho Monreal back to the bench. 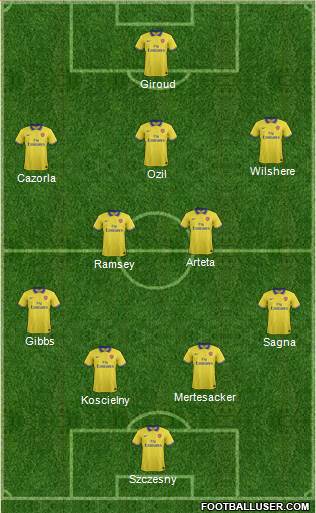 Wojciech Szczesny: Since signing his new contract, the big Pole’s form has drastically improved and he has been getting better with each passing game, making save after save on a consistent basis. With the Gunners leading by a solitary goal, Taylor swings a cross inside the box, Frazier Campbell nods it and this happens…

With his fifth clean sheet in six games, Gooner Daily rates the Polish shot stopper at 8/10.

Per Mertesacker: The BFG got an awful whack to the head from a Bacary Sagna and was the reason why there were four minutes injury time in the first half. With an able deputy like Thomas Vermaelen warming up and waiting for his chance, the BFG managed to recover without suffering any concussion and went on to have a good game. – 7/10

Laurent Koscielny – Kos the Boss was on the back pages for his poor showing for France in the first leg against Ukraine but since returning to the club, he has been on top form, continuing to keep the captain out of the side. Yesterday, he made some vital interceptions for his team and read the game superbly. – 8/10

Kieran Gibbs – With Wily Ol’ Woy Hodgson in the stands, there were whispers that he was scouting the performance of his English boys, with a certain Kieran Gibbs on the radar. He recovered well from his illness and did well in defense. Was also booked in the game but he was sensible enough not to do anything rash afterwards. – 7/10

Bacary Sagna – In recent times, we have seen Sagna’s distribution improve drastically but those delicious crosses weren’t on show yesterday afternoon. However, he still had a good game making vital interceptions and offering an outlet on the right. – 7/10

Mikel Arteta – the captain of the day was a class act in midfield and his close control gave the fans a glimpse of his days as an attacking midfielder. Arteta has been a blessing to the club and his consistent is right up there with the very best. Yesterday, he was influential all game long and his stats were sickening as always. – 9/10

Aaron Ramsey – I’ve ran out of words to describe how awesome Rambo is. This season, the Welsh Dragon has been in red hot form, and his two goals – a header and a fiercely fired shot have shown how confident this lad is in front of goal. If you think his goals were classy enough, his muted celebrations were hugely appreciated by the home crowd as they cheered their homecoming hero that haunted them. – 10/10

Jack Wilshere – The young lad scored his fastest goal in Arsenal colors in 29 seconds against Marseille and he was close to scoring his second fastest goal for the club after just 75 seconds when he latched unto Ramsey’s pass, leaving his marker for dead before casually curling a sweet effort past the goalie but it slammed the cross bar. From then onwards, his influence reduced but he did okay till his substitution nine minutes from time. –  7/10

Santi Cazorla – In my honest opinion, Santi Cazorla’s performance was poor. Yes, players get injuries and sometimes struggle to get back to their best but in recent times, Santi Cazorla has been hugely disappointing and we hope that he can come back to his best sooner rather than later. 5/10

“If you have any problems or challenges in life, contact Mesut Ozil, he will ASSIST you”

Ozil did have a “great game” by his extremely high standards but he still notched up two perfectly-timed assists for his teammates, taking his tally to 8 for the season. Gooner Daily sees it befitting to rate him with the number of assists he has created so far in his fledgling Arsenal career. – 8/10

Olivier Giroud –  Not his best day. His performance was summed up by his bizarre decision to stop while clean through… Always play to the whistle. Or always play when there is no whistle… Here’s a nice 6/10 from Gooner Daily OG.

Mathieu Flamini – The French enforcer arrived on the pitch when Cardiff were in the driving seat and alongside Arteta in the heart of the midfield, they calmed the storm. It looked as if it was written in the stars when Flamini made a rare surge forward and was picked up by Ozil. The rest they say was history… – 7/10

Nacho Monreal – After getting some full game time in midweek, the Spanish full back returned to his rightful place on the bench and as always, he was brought on to offer protection to Gibbs, a feat he achieved admirably. –7/10

Theo Walcott – It took just 48 seconds to make his mark on the game and he was so close to scoring himself. His injection of pace, albeit in his cameo appearance, was a thorn in Cardiff’s flesh and this was epitomized by an assist to Ramesy. – 7/10