Arsenal welcome Hull to the Emirates on Wednesday night looking to extend their lead at the top of the Premier League. Here is the team Wenger could go with:

Arsenal welcome Hull City to the Emirates Stadium on Wednesday night looking to extend their lead at the top of the Premier League.

The Gunners head into the midweek fixtures sitting four points clear at the top of the table and will hope to at least maintain that advantage with a win over the Tigers.

Arsene Wenger confirmed this morning that defender Bacary Sagna will miss the game with a hamstring injury so Carl Jenkinson will step in at right-back.

The boss has also hinted he will make further changes as he looks to keep the players fresh as we enter a busy period of fixtures, so Nacho Monreal could be given a start ahead of Kieran Gibbs at left-back. Captain Thomas Vermaelen has been forced to sit on the sidelines for much of the season but may get a chance to impress tomorrow night.

Mathieu Flamini is also expected to be recalled in midfield with Jack Wilshere likely to be given a breather after starting our last three games on the bounce.

Mesut Ozil is another who could be rested with big games against Everton, Chelsea and Manchester City coming up next, so Tomas Rosicky should come in while Theo Walcott is in-line to start his first game in over 2 months.

German attacker Lukas Podolski is edging closer to a comeback but is still a week away from being in contention. Here is the team Wenger could go with: 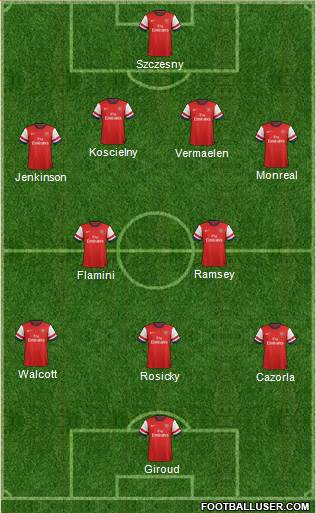