Team of the Week – Hazard Was Good, But Luis Suarez Simply Spectacular

After a superb round of midweek Premier League fixtures, we choose our Team of the Week. Do you agree with the selection? Look here and decide for yourself.

It was as if Christmas had come early for Premier League fans everywhere, as every single side was in action yesterday, in what was a sensational midweek treat.

The result of the week came from Old Trafford, as Everton triumphed 1-0 over former manager David Moyes, with Man Utd now a nasty-looking twelve points behind the pace in 9th place.

Liverpool, or rather, Luis Suarez battered Norwich into an early submission; with the Uraguyan possessing a magic touch one more against the Canaries. His four sumptuous goals left Chris Hughton’s side utterly despondent, as the Reds ran out 5-1 winners.

Chelsea had to work for their win at the Stadium of Light, with Gus Poyet’s Sunderland taking the Blues to the wire. Jose Mourino’s side prevailed, but only just; securing a 4-3 win.

Arsenal remain at the top, as they enter a daunting run of fixtures, with a comfortable 2-0 win over Hull City; while London rivals Tottenham squeezed past Fulham, 2-1. Man City survived a late scare at the Hawthorns, beating West Brom 3-2, thanks to a Yaya Toure double.

Here is the Football-Talk Team of the Week:

Tottenham boss Andre Villas-Boas was grateful to the Frenchman after his strong performance against Fulham.

“To make such decisive saves and have this impact was important for him on a personal level,” Villas-Boas said after 2-1 win over Fulham,

“He fought hard to get his place in this team [last year]. He’s a top, top goalkeeper who has great ambitions for himself and the team. He showed his qualities once again.” [source: Goal]

A string of crucial blocks in the dying moments preserved Spurs’ lead, and ensured they brought an end to a four-game winless run.

The Serbian left-back had a highly productive game against West Brom; first providing the cross for Yaya Toure to score the first, then winning a debatable penalty for the Ivorian to seal the points. Smacked the ball against his own keeper to allow the Baggies an unlikely lifeline, but overall a good showing.

The England man had a great game against the Champions, keeping the Utd attackers quiet, and distributing well. The 31-year-old won 100% of his aerial duels, won four tackles, and was a towering presence in the Toffees’ defence.

The French international is having a great season, along with the rest of the Gunners back-line. In what was Arsenal’s fifth clean sheet in six games, Koscielny helped nullify the limited Hull attack; and had a 96% pass accuracy from the back.

It has been quite a week so far for the young Costa Rican; scoring not only in last weekend’s thrashing of Stoke, but also the winning goal at Old Trafford in the Toffees’ amazing win on Wednesday. The 23-year-old bust a gut down the left flank, once more in the absence of Leighton Baines, and tucked in the winner from a Lukaku cross/shot.

Fresh from being named the ‘BBC African Player of the year for 2013’, Yaya Toure put in a match-winning performance at the Hawthorns; bagging two goals and commanding the centre of midfield with his effortless strength.

The Belgian’s performance against the Black Cats was arguably his best ever in a Chelsea shirt, as he tore the Sunderland defense to pieces with stunning agility and brutally direct play. He smacked in two super goals, and set up Frank Lampard for the initial Chelsea equaliser.

A real thorn in West Brom’s side; he set up Luis Suarez for his second goal with a super corner, and always looked threatening with the ball at his feet. The 21-year-old will be crucial to the Liverpool cause in the coming months.

Arsenal’s new superstar was at his imperious best against Hull; bagging the goal that took the game beyond Steve Bruce’s side, and making four key passes. A super display, with the Gunners continuing to ride high.

How must the Norwich boys feel, on the coach back to Norfolk, after coming up against the Uruguayan once more?

The 26-year-old cracked in four of the best goals you’re likely to see this season, and even had time to set up Raheem Sterling for the fifth. Norwich are a cursed side when it comes to the attacker; with 11 goals in four games now against the Canaries, Suarez’ really can make your teeth hurt when in such sweet form.

Before you all switch off in disgust, let me be clear; most of you might see the comparison between my striker picks for the team of the weekend to be as similar as a Pogo stick next to a Lamborghini.

And yet, the Dane warrants his place, with a decent headed goal in the first 2 minutes (his first for Arsenal since 2011); and a solid outing which, most importantly for Wenger, gave first choice man Olivier Giroud a rest.

Bendter scoring a goal is enough for a mention here; a fun little novelty to cap off a fantastic midweek round of games.

Goal of the Weekend: Luis Suarez vs. Norwich

Player of the Weekend: Luis Suarez 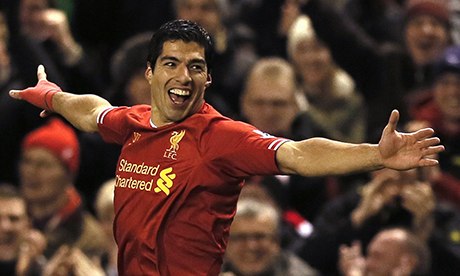