Patrick Vieira and Roy Keane have created their combined Arsenal and Manchester United all-star team as part of a TV show. Have a look at the team here.

As two of the very best midfielders to have ever graced the Premier League, you’d think Patrick Vieira and Roy Keane would know a thing or two, but do you agree with their combined Arsenal and Manchester United all-star team?

The former Arsenal and Man Utd captains were fierce enemies on the pitch between 1996 and 2005 but they came together as part of a TV documentary called ‘Keane and Vieira – Best of Enemies‘, which airs on ITV4 tonight at 10pm, to create their fantasy dream team made up of players from the two clubs.

Peter Schmeichel narrowly got the nod over David Seaman in goal while Tony Adams and Jaap Stam were chosen as the two centre-halves, but it’s at full-back where the pair really clashed. Vieira was adamant Lauren should be selected ahead of the likes of Paul Parker and Gary Neville at right-back but the duo couldn’t be separated when it came to deciding between Ashley Cole and Denis Irwin for the left-back slot. Eventually BOTH players were selected as neither Vieira nor Keane would back down.

Unsurprisingly, both men selected themselves in the centre of midfield which meant no place for the likes of Paul Scholes or Emmanuel Petit. Cristiano Ronaldo was an obvious choice but Vieira insisted Robert Pires was picked over Ryan Giggs and David Beckham.

Up front was another contentious area with so many great strikers to choose from, but eventually the pair settled on Thierry Henry and Eric Cantona meaning there was no place for the likes of Dennis Bergkamp or Ruud van Nistelrooy.

Here is the team Vieira and Keane went with: 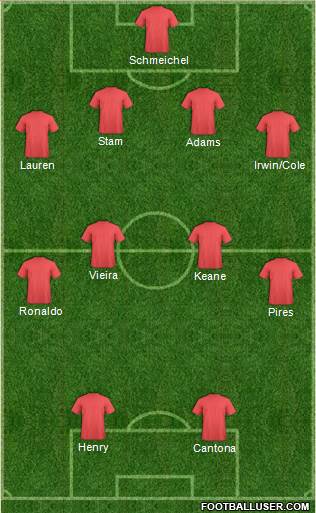 What do you think of their team? Agree? What would yours be?