Arsenal take on Newcastle United at St James Park on Sunday afternoon looking to tighten their grip at the top. Here’s the team news and a predicted team.

Arsenal take on Newcastle United at St James Park on Sunday afternoon looking to cement their place at the top of the Premier League.

The Gunners moved back to the summit after a 3-1 win over West Ham on Boxing Day and will be keen to at least maintain their current one point advantage this weekend.

Arsene Wenger has already confirmed he’ll be forced into making changes as the hectic festive fixture list begins to take it’s toll on the players.

The likes of Olivier Giroud and Mesut Ozil and expected to be given a rest while Kieran Gibbs could also be given a breather with Nacho Monreal coming in at left-back.

Lukas Podolski could start up front having come off the bench to score one and set up another against the Hammers, while Tomas Rosicky should play after not featuring at Upton Park.

Mathieu Flamini is also likely to come in for Mikel Arteta while Jack Wilshere should replace Aaron Ramsey – who has been ruled out with a thigh strain – after serving a two-match ban.

Laurent Koscielny may be recalled after recovering from a cut to his knee and could replace Thomas Vermaelen in defence, but Alex Oxlade-Chamberlain, Yaya Sanogo and Abou Diaby are all still out injured. 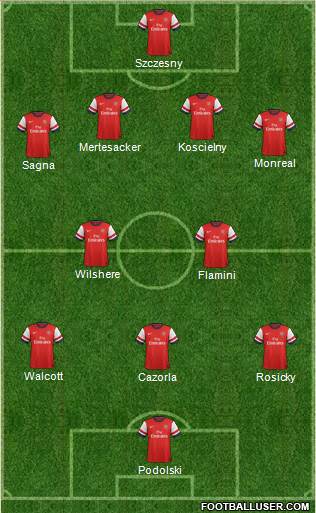 What do you think of our team? What would your line-up be? Share your thoughts below.