The Football-Talk Team of the Weekend – Hazard & Lukaku Sparkle

As we head into 2014 with Arsenal top of the League, Tom Gatehouse selects his Team of the Week for the final time this year. Have a look and see if you agree

Arsenal head into 2014 as leaders of the Premier League after a hard fought 1-0 win at Newcastle. It was an essential three points due to the congested nature of the top of the league, with only two points separating the top three.

Chelsea are third having toppled Liverpool at Stamford Bridge on Sunday, with the Reds dropping down to fifth after consecutive losses.

Here is the Football-Talk Team of the Week, Gameweek 18: 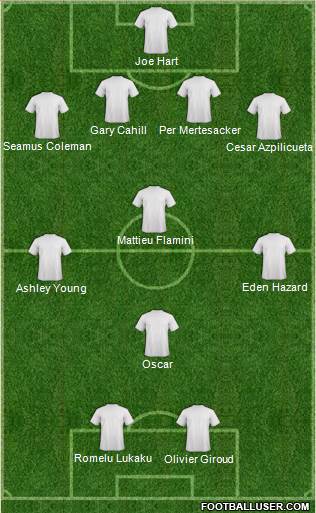 The reinstated keeper was key to City ousting a resolute Palace side, with the England keeper emerging battle-worn, sporting a juicy black-eye, and having earned a hard-fought clean sheet.

Clearly the most exciting full-back around, the Irishman grabbed another goal for the Toffees, and charged up and down the flank to great success.

Effortlessly switched flanks due to the injury to Ivanovic in the first half, Azpilicueta did superbly to keep pace with Liverpool’s dynamic forward line, and played a key role in the buildup to the second Chelsea goal.

Another Chelsea defender who excelled at Stamford Bridge on Sunday. Alongside John Terry, Cahill kept Liverpool danger-man Luis Suarez quiet all game (some feat!), and was a calm head in a frantically attacking game.

Another rock solid display from the German, as Arsenal earned a fantastic victory at St James Park.

Hazard is in a rich vein of form at present, and is clearly Chelsea’s most prominent attacking presence. The Belgian guided a lovely effort past Liverpool keeper Mignolet to equalise in the first half, and consistently attacked from the flanks as Chelsea pinned their rivals back.

The revitalised winger could have scored with a number of long range efforts, was a valuable outlet for the Utd defence, and seems to be flourishing with the renewed confidence he has been afforded by David Moyes.

Typically destructive from the French midfielder, and it was certainly needed against a tough Newcastle outfit. The win takes Arsenal back to the summit, and Flamini is proving to be a key member of the squad.

The young Brazilian attacker showed the many facets of his game on Sunday. Oscar set up the two goals after positive forays towards the Liverpool box, and also tracked back superbly, nicking the ball off a number of surprised Liverpool players.

He was very lucky however not to be dismissed after a wild challenge on compatriot Lucas at the end, as the youngster’s legs went after an all-action display.

Another goal against Southampton on Sunday adds to his growing tally of strikes, with the Belgian third only to Luis Suarez and Robin van Persie in the number of goals scored since the beginning of last season!

Although the French striker did not have the best all round display on Sunday, he did score the crucial goal that won his side the match, and took them up to first place once again.

A decent target-man, Giroud would benefit from an increase in competition at the Emirates.

Goal of the Weekend: Seamus Coleman vs Southampton

Player of the Weekend: Eden Hazard

What do you think? Agree with my selections? Let me know in the comments below…