Manchester United will look to put a disappointing start to 2014 behind them as they welcome Swansea City to Old Trafford. Here’s a predicted starting eleven.

Manchester United will look to put a disappointing start to 2014 behind them as they welcome Swansea City to Old Trafford for the second week running.

The champions will be out for revenge after last weeks 2-1 defeat to the Swans in the third round of the FA Cup. That defeat was followed by a 2-1 loss to Sunderland in the first leg of the Capital One Cup semi final on Tuesday, which was United’s third consecutive defeat of 2014, so David Moyes will be desperate to get back on track on Saturday.

However, the Scot is facing something of an injury crisis at present, which certainly isn’t helping matters on the pitch. Wayne Rooney has missed the last two games with a niggling groin injury but is expected to hand Moyes a major boost by returning to action this weekend.

Robin van Persie is still no closer to returning from a thigh injury that’s already kept him out for over a month, while wingers Ashley Young and Nani are also still missing through injury.

Phil Jones is edging his way back to full fitness but this game is likely to come too soon, so Tom Cleverley should continue alongside Michael Carrick in the center of midfield.

Chris Smalling may have to start at the back after Jonny Evans limped off in midweek and he joins Rio Ferdinand on the sidelines. Marouane Fellaini is still out with a wrist injury.

Here is our predicted team: 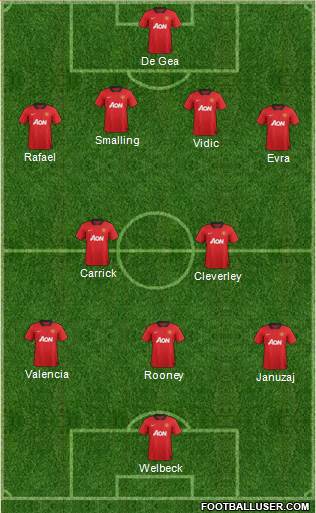