Premier League leaders Arsenal are in the Midlands to take on Aston Villa on Monday. Here is the latest team news and our predicted starting eleven for the game

Premier League leaders Arsenal are in the Midlands to take on Aston Villa on Monday night looking to make it four wins on the bounce.

Arsene Wenger was handed a devastating injury blow this week with the news that Theo Walcott will miss the rest of the season with a knee injury. The attacker was forced off during the latter stages of last weekend’s 2-0 win over Tottenham and it was confirmed on Monday that he ruptured his cruciate ligament and will be out for 6 months.

With Walcott injured, it opens the door for Serge Gnabry to stake his claim for a regular starting spot. The young German was excellent against Spurs and has done enough to keep his place in the side against Villa.

Thomas Vermaelen is out with a knee injury so Per Mertesacker and Laurent Koscielny are certain to start at the back, and Nacho Monreal is also likely to keep his place with Kieran Gibbs a major doubt.

Mikel Arteta and Jack Wilshere should start in the centre of midfield with Aaron Ramsey still out with a thigh injury, although Mathieu Flamini is also pushing for a start.

Mesut Ozil and Olivier Giroud are back after recovering from knocks while Alex Oxlade-Chamberlain is expected to be among the subs after playing 45 minutes for the under-21’s on Thursday after five months out with a knee injury. 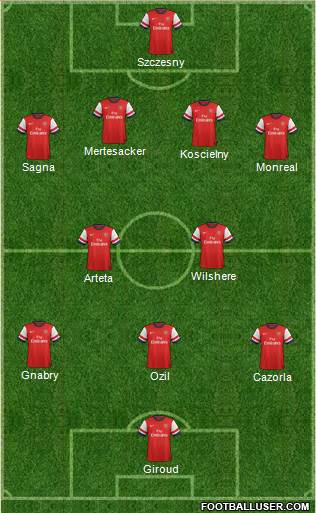