[Photo] Salah Holding His New No.15 Shirt – Here’s How He’ll Fit In To Chelsea’s XI

Chelsea completed the signing of Mohamed Salah on Sunday. Here’s the player holding his new No.15 shirt and how the Chelsea line-up will look with him included.

Chelsea completed the signing of Mohamed Salah from FC Basel on Sunday afternoon.

The Blues moved quickly to replace Juan Mata after the Spaniard was sold to Manchester United and a deal was soon agreed to sign Salah from the Swiss champions.

After completing a medical and agreeing personal terms, the club announced his signing this afternoon and revealed he would be wearing the No.15 shirt after putting pen-to-paper on a five-and-a-half-year contract. Here’s a picture of him holding his new shirt:

While Chelsea didn’t disclose the exact fee they paid for the 21-year-old, it’s widely reported that the west Londoners paid £11m for his services. Salah will train with his new team mates on Monday and could even be in contention to make his debut against West Ham on Wednesday night at Stamford Bridge.

The Egyptian international will now battle it out with the likes of Eden Hazard, Oscar, Willian and Andre Schurrle for a place in Chelsea’s attack. With Hazard and Oscar almost guaranteed their place in Jose Mourinho’s starting eleven, it seems Salah’s main competition will be Schurrle and Willian.

Willian has been the preferred option for Mourinho in recent weeks, although Schurrle did put in an encouraging display against Stoke City on Sunday, so it promises to be an intriguing battle. The Blues boss confirmed that Salah can be deployed anywhere across the attacking third, telling reporters today:

“I like the fact that he can play the same way our attacking players do, which is players with adaptability, to play right, left or behind the striker,” Mourinho is quoted as saying by the Guardian

Mourinho will continue to rotate his squad from game-to-game to keep his players fresh and Salah’s addition has certainly given him another option in attack, but he’s likely to be considered as one for the future and may not be regarded as a regular starter just yet.

However, when he does feature and Mourinho has all his players available, this is how Chelsea could look with the new man in their side; 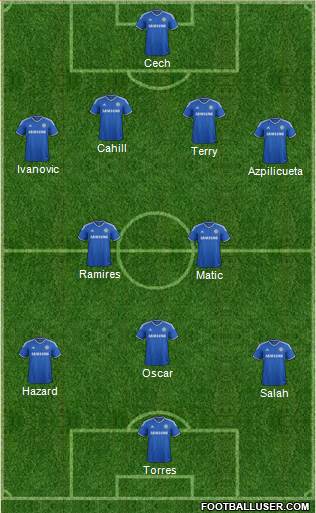 What do you think of the signing of Salah? Where will he play? Share your views below.