Manchester United play host to Cardiff City at Old Trafford on Tuesday night looking to kick start their push for the top-four. Here’s our predicted line-up.

Manchester United play host to Cardiff City at Old Trafford on Tuesday night looking to kick start their push for the top-four.

All eyes will be on new signing Juan Mata after he completed his big-money move from Chelsea over the weekend and after taking part in full training with his new team mates on Monday, David Moyes is expected to hand the Spaniard his debut tomorrow night.

Mata could be deployed in the ‘hole’ behind Danny Welbeck with Adnan Januzaj and Antonio Valencia on the wings. Wayne Rooney and Robin van Persie also took part in full training this afternoon but Moyes is likely to be cautious with the duo after their injury frustrations so substitute roles are probably the best they can hope for.

Nemanja Vidic remains suspended so Chris Smalling could start alongside Jonny Evans in defence with Phil Jones partnered by Darren Fletcher in midfield with Michael Carrick missing with an ankle injury. 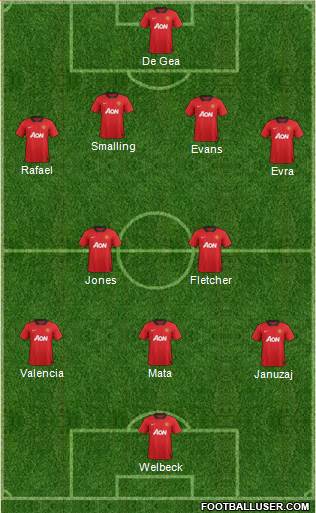 What do you think of our team? What line-up would you choose for the game? Share your views below.