Manchester United take on Stoke at the Britannia Stadium on Saturday afternoon with the champions looking to move in on the top-four. Here’s a predicted line-up

Manchester United take on Stoke City at the Britannia Stadium on Saturday afternoon with the champions looking to move in on the top-four.

David Moyes men have been boosted by the signing of Juan Mata from Chelsea and the Spaniard played his part in last weeks 2-0 win over Cardiff City at Old Trafford on Tuesday night.

The 25-year-old is sure to start again this weekend but may switch out to the left with Wayne Rooney in line to return to the side after coming off the bench in midweek. The duo are likely to support Robin van Persie in attack along with Antonio Valencia.

Adnan Januzaj is pushing for a recall after starting on the bench on Tuesday while Ashley Young will be unlucky to drop out having scored an excellent goal, but the pair may have to make-do with places among the subs.

The back four is expected to remain unchanged but we could see Darren Fletcher come in to the midfield alongside Phil Jones to give United that added physicality against a tough Stoke side. 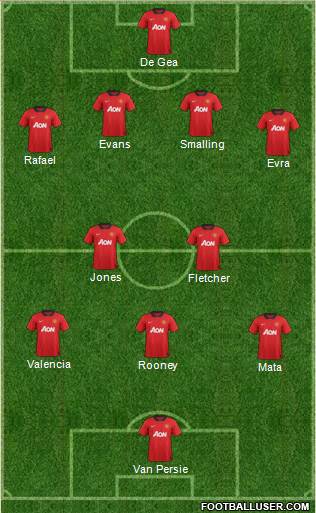