Arsenal play host to Bayern Munich on Wednesday night for the first leg of their Champions League last 16 tie. Here’s out predicted starting team for the game

Arsenal play host to Bayern Munich on Wednesday night in the first leg of their Champions League last 16 tie.

The Gunners head into the game off the back of Sunday’s 2-1 win over Liverpool in the FA Cup and Arsene Wenger is expected to make several changes to his side after resting a number of first team players.

Wojciech Szczesny will almost certainly return in goal despite the impressive performance of Lukasz Fabianski on Sunday, while Bacary and Kieran Gibbs will also be recalled to make up Arsenal’s ‘first choice’ back five.

With Mikel Arteta suspended for the game, Jack Wilshere is likely to come back in having been rested at the weekend and he’ll take his place alongside Mathieu Flamini in midfield.

Santi Cazorla was a second half substitute against Liverpool and I expect he’ll start ahead of Lukas Podolski on the left, but it’s difficult to know who Arsene will go with on the right. Alex Oxlade-Chamberlain has been in superb form of late and it would be harsh to drop him. However, Tomas Rosicky was fully rested on Sunday suggesting he’ll play a major role in this game.

Olivier Giroud will also be recalled up front in place of Yaya Sanogo – who made his debut at the weekend – and Mesut Ozil will of course retain his place in attack. Here’s the team I think Wenger will pick: 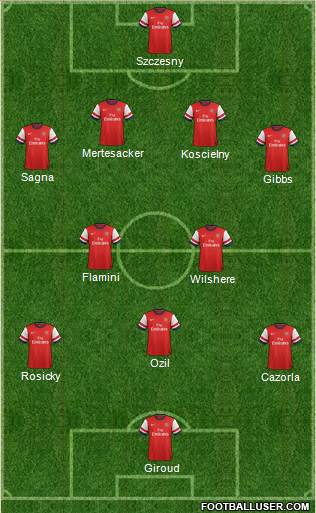 This is a reasonably balanced side but my worry would be a lack of pace. With Oxlade-Chamberlain and Theo Walcott, we lack the pace to really hurt a team so we’ll have to rely on our passing game if this is the team that Arsene picks.

What team would you go with? Share your suggestions below.