Arsenal take on Stoke City at the Britannia Stadium on Saturday afternoon looking to keep pace at the top of the Premier League.

We head into the weekend fixtures sitting just a single point behind leaders Chelsea and with the Blues also playing at 3pm tomorrow, we need to be ready to take advantage of any slip up from our rivals by securing all three points away at Stoke.

We also desperately need a win ahead of what’s going to be a defining few weeks that sees us take on the likes of Everton, Spurs, Chelsea, Man City and Bayern Munich. It’s not going to be easy as the Britannia is always a tough place to visit and we haven’t won their in our last three visits, but a 4-1 win against Sunderland last week should give us a morale boost heading into the game.

Stoke are on a poor run of late that’s seen them pick up just one win in their last 10 league games to leave them sitting just three points off the drop zone, so this could be a good time to play Mark Hughes side.

It looks like we have problems at left-back with both Nacho Monreal (foot) and Kieran Gibbs (buttock) major doubts for the game. There was no sign of either player at training on Friday so it looks like Arsene Wenger will have to find someone to fill in.

One option is Thomas Vermaelen, who’s fit again after recovering from a calf injury, but the Belgian may not be risked after two months out, so Bacary Sagna may move across with Carl Jenkinson coming in at right-back.

Mesut Ozil is also expected to return after being rested for the win over Sunderland last weekend while Alex Oxlade-Chamberlain is also pushing for a recall after not featuring against the Black Cats last time out.

Aaron Ramsey is still at least two weeks away from returning so he joins Theo Walcott, Abou Diaby and Kim Kallstrom on the sidelines.

Stoke are able to call upon the services of defender Robert Huth after he came through a reserve match in midweek, so the German is likely to come straight back in alongside Ryan Shawcross at the back.

Winger Matthew Etherington is pushing for a recall after also featuring on Tuesday, while Stephen Ireland, John Guidetti and Andy Wilkinson are could all be involved as well after returning to full training, but Oussama Assaidi remains out with a knee injury. 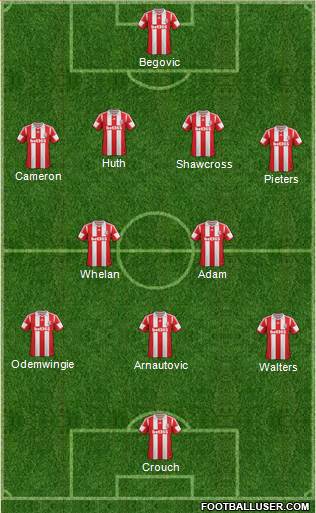 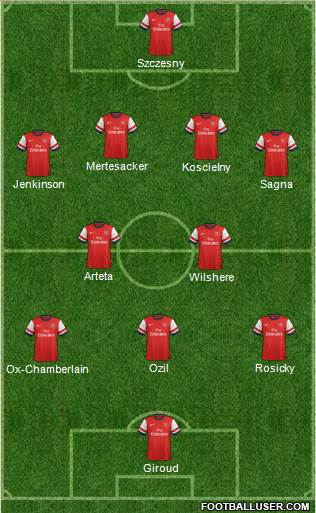 Mesut Ozil: The German has endured a difficult couple of weeks and he’ll be keen to prove his critics wrong this weekend. There’s no doubting his quality and while Stoke away may not be the ideal place for him to showcase his talents, I can still see him having a real influence on this game.

Stoke 1-2 Arsenal: This hasn’t always been a happy hunting ground for us but we’re a far better side than in previous years and I can see us coming away with a vital three points tomorrow.