Arsenal have the chance to put Saturday’s disappointment behind them when they welcome Swansea City to the Emirates on Tuesday night. Here’s our predicted team

Arsenal have the chance to put Saturday’s disappointment behind them when they welcome Swansea City to the Emirates on Tuesday night. Here’s Gooner Mac’s predicted team…

It’s going to be interesting to see how Arsene Wenger reacts to the thrashing at Stamford Bridge. Will he give the same players a chance to redeem themselves? Or will be ring the chances? I have a feeling it’s going to be somewhere in the middle, as it would be hugely surprising if the boss didn’t at least make a couple of changes to freshen things up.

There has been a lot of talk in the newspapers that Wojciech Szczesny might be dropped but I think Arsene will stick by the young Pole. Lukasz Fabianski has already confirmed he’s leaving at the end of the season so there is little point unsettled Szczesny by dropping him for a player who’s not going to be here long-term. Let’s give Szczesny the opportunity to bounce back.

We will be forced into at least one change at the back with Laurent Koscielny ruled out with a calf injury so Thomas Vermaelen is expected to come in alongside Per Mertesacker. Kieran Gibbs was successful with his appeal against the unjust red card he received on Saturday but I think the boss might bring Nacho Monreal in for this one.

Leaving Mathieu Flamini out against Chelsea was a mistake by Arsene and I think we’ll see the Frenchman come in to offer more protection in front of a back-four that was badly exposed last time out. Alex Oxlade-Chamberlain was also successful with his appeal against the red card he was supposed to get on Saturday, so he’ll be available and could start on the wing where his pace will be better utilised.

The Ox was very poor at the weekend but with Theo Walcott, Aaron Ramsey, Jack Wilshere and Mesut Ozil all out, we have few options to call upon in attack. Tomas Rosicky looked a little tired during the second half at the Bridge so I expect he might be left out to keep him fresh for the Man City game on Saturday, so Santi Cazorla and Lukas Podolski could keep their places.

I do however think that we might see young Yaya Sanogo start up front. Olivier Giroud’s form has been pretty woeful of late and he looked leggy against Chelsea, so a rest might be in order ahead of the City clash with Sanogo next in line to start in attack. 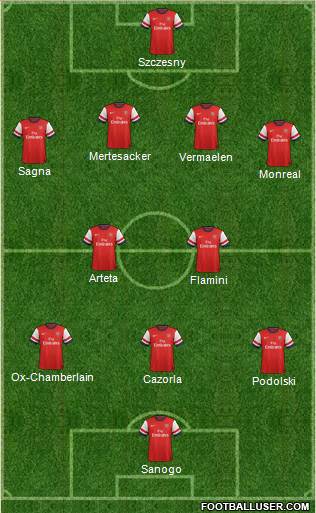 What do you think of the team? What side would you like to see put out? Share your views below.