Man Utd are preparing for Wednesday’s Champions League second leg against Bayern Munich. Here we have the latest team news and our predicted starting eleven.

Manchester United are in Germany in preparation for Wednesday night’s crucial Champions League second leg against Bayern Munich. Here we have the latest team news and our predicted starting eleven.

Ahead of the game, boss David Moyes has been speaking to the media at his pre-match press conference today and gave ManUtd.com an update on the fitness of star striker Wayne Rooney.

The 28-year-old missed Saturday’s 4-0 win at Newcastle with a toe injury that he picked up during the first leg last week but he trained this morning and Moyes has confirmed the forward is desperate to be involved and is even willing to take pain-killing injections to get him through the game.

“Wayne was able to train and he is massively keen to play,”

“He’s not trained all week so we have to be wary of that. We’ll do everything we possibly can. He’s happy to take an injection to play in the game, which shows you his feeling about the game and about the club.

“We think it’s okay. We wouldn’t do anything medically wrong. We’ve taken advice from the doctors and the people who advise us. Everybody knows the type of character Wayne is and he is determined to play. If he is determined we would be mad not to give him that opportunity.” Moyes is quoted as saying by ManUtd.com

So it looks like Rooney will play and is likely to be supported by Danny Welbeck – who was impressive in the first leg – and Antonio Valencia in attack, and with Juan Mata cup-tied, Shinji Kagawa could be deployed in the ‘hole’.

Ryan Giggs is in contention after training today following a hamstring problem but Moyes could go with Darren Fletcher alongside Michael Carrick in midfield after the Scot put in an excellent display at St James Park at the weekend.

However, Marouane Fellaini and Rafael didn’t travel to Germany as they both missed training on Tuesday through injury, while Jonny Evans has also been left back in Manchester as he continues to build-up his match fitness following a spell on the sidelines with a calf injury.

Here’s the side we think Moyes will go with: 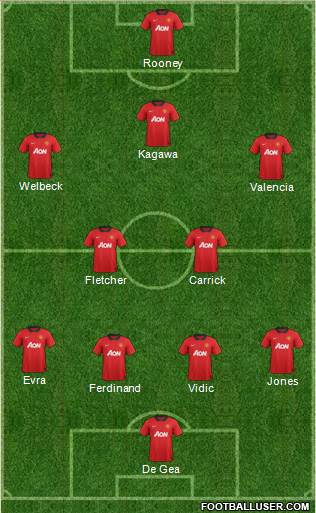