Following on from the release of Chelsea’s new 2014/15 home kit, an image has been leaked online of what appears to be the clubs third kit for next season

Following on from the official release of Chelsea’s new 2014/15 home kit, an image has been leaked online of what appears to be the clubs third kit for next season.

Kit manufacturer Adidas went with horizontal blue and dark blue stripes for the new home kit (image below) and it seems they may have followed on with the stripped effect for the third kit as well.

If the image below is accurate, then the third kit will be a dark navy colour complimented by electric blue detailing including vertical stripes on the main body of the shirt. It’s certainly different and the more you look at it, the more it grows on you. Either that or you begin to feel slightly sick!

With Chelsea still challenging for the Premier League title and booking their place in the last four of the Champions League with a dramatic victory over PSG on Tuesday night, could Jose Mourinho’s men be wearing these new kits as historic double-winners next season? 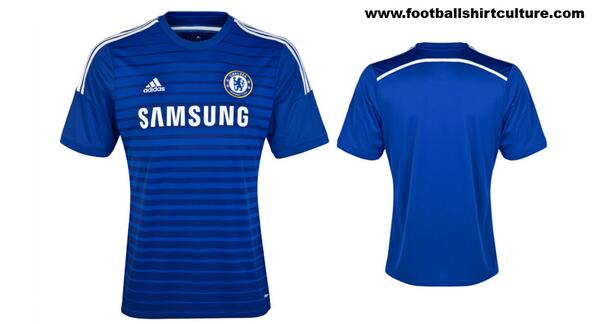