Liverpool will hold crisis talks today to discuss Luis Suarez after FIFA opened disciplinary proceedings against the striker following his bite on Chiellini. 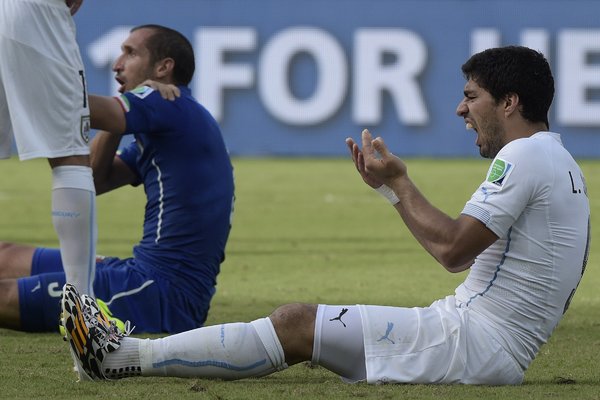 Liverpool officials are due to hold crisis talks today to discuss the handling of Luis Suarez after FIFA opened disciplinary proceedings against the striker following his apparent bite on Giorgio Chiellini.

Suarez is once again hitting the headlines for all the wrong reasons after sinking his teeth into the Italy defender during the closing stages of last nights dramatic 1-0 win that sent Uruguay through to the knockout stages of the World Cup.

Football’s governing body has now confirmed on it’s website that it has opened a case against the 27-year-old and invited Suarez and the Uruguayan FA to provide it’s evidence in defence of the player by 9pm UK time.

“FIFA can confirm that disciplinary proceedings have been opened against the player Luis Suarez of Uruguay following an apparent breach of art. 48 and/or art. 57 of the FIFA Disciplinary Code during the 2014 FIFA World Cup Brazil match Italy-Uruguay played on 24 June 2014.

“The player and/or the Uruguayan FA are invited to provide with their position and any documentary evidence they deem relevant until 25 June 2014, 5pm, Brasilia time.

“Furthermore, according to art. 96 of the FDC, any type of proof may be produced (par. 1), in particular are admissible, reports from referees, declarations from the parties and witnesses, material evidence, audio or video recordings (par. 3).”

Suarez is now facing a lengthy ban if and when he’s found guilty that could span up to two years, and there have been reports that suggest FIFA have the power to impose the ban on domestic matches as well as international games.

While it’s almost certain Suarez won’t play again at this summers World Cup, Liverpool have a tricky situation on their hands. This is the last thing  the club will want to deal with and the Mirror are reporting that the clubs board members will hold an emergency cross-Atlantic conference meeting today with Brendan Rodgers to discuss the future of the striker.

The newspaper suggests that Anfield bosses may have run out of patience with the PFA Player of the Year and ‘no one within Anfield has any will to defend Suarez’ again, having worked so hard to rehabilitate him following his chomp on Chelsea’s Branislav Ivanovic in 2013.

Although the incident didn’t take place while wearing a Liverpool shirt this time, Suarez is still a representative of LFC and has once again tarnished the great clubs reputation with his latest act of cannibalism, and this is going to lead to some tough decisions at the club.

Suarez was given a very blunt warning by Liverpool bosses following the Ivanovic incident and the Mirror claim that they may decide now is the best time to cash-in on the striker given the serious interest being shown by Barcelona and Real Madrid. However, it remains to be seen whether that interest has now wavered following this latest incident.