Chelsea have confirmed they have agreed a deal to sign striker Diego Costa from Atletico Madrid this summer. See how the Blues will line-up with their €40m man

The summer transfer window is now open for business and it’s expected to be a busy few weeks as managers strengthen their squads ahead of next season, so we’ll bring you all the latest news and gossip. Today, Chelsea confirm a deal for Diego Costa.

Chelsea have finally confirmed they have agreed a deal to sign striker Diego Costa from Atletico Madrid this summer.

The 25-year-old Spanish international has been strongly tipped to join the Blues this summer with reports last month claiming that a deal was already in place before the player headed off to the World Cup.

With Spain dumped out in the group stages, it’s meant the move could be officially wrapped up earlier than expected and Chelsea announced on their official website earlier this evening that they have agreed to pay the strikers release clause – which is believed to be €40m (£32m).

A statement on Chelseafc.com read:

Chelsea Football Club can confirm an agreement has been reached with Atletico Madrid for the transfer of Diego Costa, with Chelsea meeting the buy-out clause for the Spanish international.

Costa becomes the clubs second major signing after midfielder Cesc Fabragas’ arrival from Barcelona and he’ll bring with him a major goal threat, with the striker scoring a sensational 36 goals last season to help Atletico win the La Liga title and reach the final of the Champions League.

Although Jose Mourinho is expected to sign a few more players this summer, he’s already built a fearsome looking squad and I’m going to have a look at how they might line-up next season with their two new big-money additions.

Obviously Costa is expected to be Chelsea’s first choice striker next season with Mourinho previously showing no real faith in his current crop, so I expect the Brazilian-born hitman will lead the line.

Fabregas on the other hand could be deployed in a deep-lying playmaker role alongside Nemanja Matic, and this would allow Oscar to retain his place in the team. However, Mourinho prefers to have two powerful, ‘warriors’ in front of his defence so unless he’s planning on changing tact to a more attack-minded set-up next season, I’d expect Ramires or a new signing to play with Matic and Fabregas to play in the ‘hole’ behind Costa.

I’ve also gone with youngster Thibaut Courtois in goal but it could just as easily be Petr Cech – we’ll have to see what Mourinho’s plans are for the Belgian international.

Here’s how Chelsea could look with Fabregas and Costa in the team: 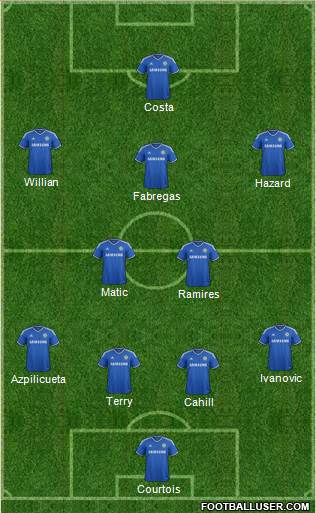 What do you think of the team? Is it good enough to win the league?