Chelsea Set To Open Talks With Spaniard Over Surprise Move

The summer transfer window is now open for business and it’s expected to be a busy few weeks as managers strengthen their squads ahead of next season, so we’ll bring you all the latest news and gossip. Today, Chelsea are set to open talks with Real Madrid goalkeeper Diego Lopez. 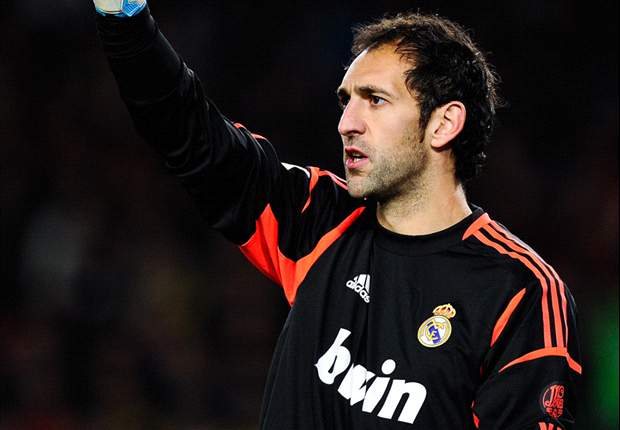 Some interesting reports coming out of Spain today with speculation claiming that Chelsea are set to open talks with Real Madrid goalkeeper Diego Lopez about a shock free transfer switch to Stamford Bridge.

Lopez has been keeping goal at the Bernabeu since Jose Mourinho signed him from Sevilla in January 2013 and immediately installed him as first choice ahead of club legend Iker Casillas.

However, despite his decent form, reports suggest the 32-year-old has now been told he is free to leave after Madrid wrapped up a deal to sign Costa Rican No.1 Keylor Navas from Levante.

It had initially been thought that Casillas may be the man to make way but the Metro are citing reports from Madrid-based newspaper Marca who claim that Real bosses have decided to retain the long-serving Spanish No.1 and allow Lopez to leave on a free transfer instead.

The paper goes on to state that Chelsea boss Jose Mourinho is keen on bringing him to Stamford Bridge and is set to open talks about a potential move, but any deal is dependent on the future of Petr Cech.

There has been growing speculation suggesting that Mourinho will allow the Czech international to leave this summer so he can install Thibaut Courtois as his new first choice goalkeeper, with PSG and Monaco among the clubs understood to be interested.

If Cech did make a shock exit this summer, it would mean Mourinho needs a reliable back-up to Courtois and it appears he’s identified Lopez as a potential target.

As surprising as it would be for Chelsea to sell Cech, neither he nor Courtois are going to be content being a No.2 next season so something’s got to give, and if Mourinho wants to go with the Belgian youngster then it will pave the way for Cech’s exit.

Lopez would be an excellent signing on a free transfer though and he’d be an experienced back-up for this coming season,  but we’ll have to see how things develop over the coming days and weeks.