Chelsea kick off their Premier League season with an away trip to Burnley on Monday night. Here is the starting line-up we think Jose Mourinho will go with.

Chelsea kick off their Premier League season with an away trip to Burnley on Monday night. Here is the line-up we think Jose Mourinho will go with.

Goalkeeper: All eyes will be on Mourinho to see who he goes with in goal. The Portuguese coach has a huge decision to make over whether to start long-serving Petr Cech or the up-and-coming talent of Thibaut Courtois, and I think we’ll see the Belgian youngster get the nod.

Defence: New signing Filipe Luis is expected to make his competitive debut at left-back which should see Cesar Azpilicueta move over to the right side. Gary Cahill should start alongside John Terry at the heart of defence.

Midfield: Cesc Fabregas is also expected to make his first start in Chelsea colours in the Premier League following his move from Barcelona and the Spaniard should take his place alongside Nemanja Matic in midfield.

Attack: Eden Hazard, Oscar and Willian are the favourites to start in attack although the likes of Mohamed Salah and Andre Schurrle are also pushing for starting spots. Diego Costa will spearhead the front-line with Didier Drogba ruled out through injury.

Here’s how the team should line-up: 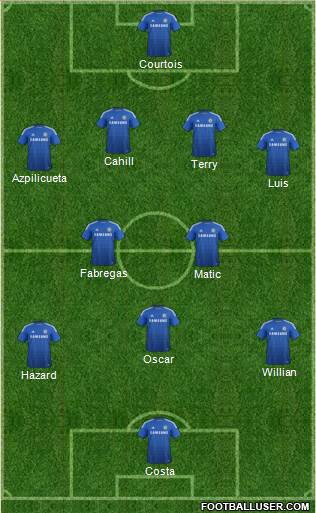 What do you think of the team? What would be your starting line-up?