Mario Yepes is hoping to secure a move to the Emirates soon with reports suggesting that Arsenal are lining-up a shock swoop for the Colombian international.

The summer transfer window may be closed but managers are already thinking ahead to future transfer windows so we’ll bring you all the latest news and gossip. Today, Arsenal are linked with Mario Yepes. 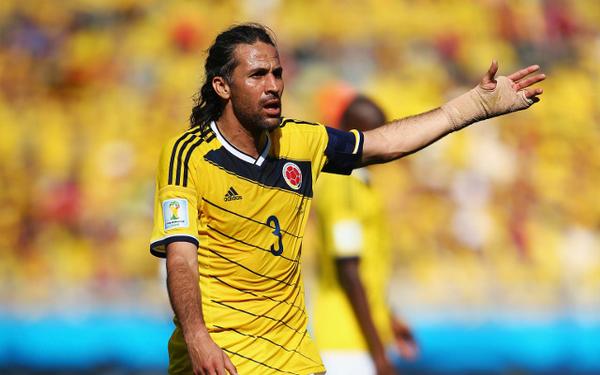 Mario Yepes is hoping to secure a move to the Emirates soon with reports suggesting that Arsenal are lining-up a shock swoop for the Colombian international.

The transfer window may have closed on Monday night but clubs are still allowed to sign players who are out of contract and Yepes became a free agent after being released by Atalanta at the end of last season.

Despite being at the ripe old age of 38, the centre-back was still selected for Colombia at the World Cup finals and was a rock at the back, starting in all five games en route to the quarter finals where they eventually lost out to hosts Brazil.

His impressive performances appear to have caught the eye of Arsenal boss Arsene Wenger as the Daily Star claim that he is set to offer Yepes a short-term deal to make the move to North London.

The newspaper suggests that Yepes is keen to try his luck in the Premier League and is hoping negotiations with Arsenal will be swiftly concluded over the coming weeks.

A centre-back became a priority after selling Thomas Vermaelen to Barcelona but despite making enquiries for several players throughout the summer, Wenger failed to get any deal over the line and we’re now left with just Calum Chambes as back-up to first choice pair Per Mertesacker and Laurent Koscielny.

The teenager has already played far more first team football than many would have expected following his £16m move from Southampton and he could benefit from an experienced pro like Yepes both on and off the field.

However, Wenger must have reservations about signing a player who turns 39 in January and there must be concerns over whether he’d be able to cut it in the fast-paced Premier League.