Arsenal and Chelsea look set to go head-to-head for over Paco Alcacer with reports claiming the duo are readying €18m January bids for the Valencia striker.

The summer transfer window may be closed but managers are already thinking ahead to future transfer windows so we’ll bring you all the latest news and gossip. Today, Arsenal and Chelsea are linked with Paco Alcacer. 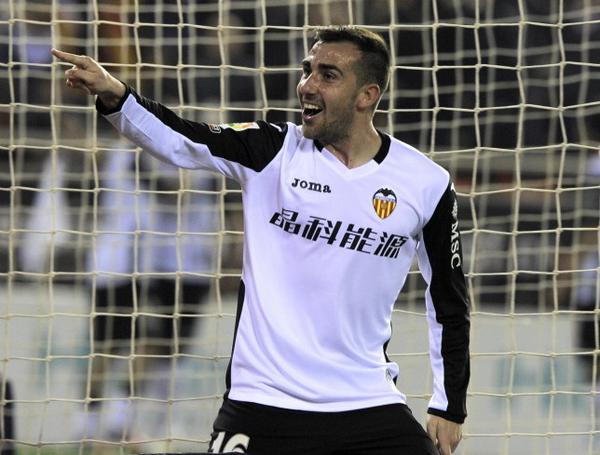 Arsenal and Chelsea look set to go head-to-head for the signing of Paco Alcacer with reports claiming the duo are readying €18m (£14.5m) January bids for the Valencia striker.

Alcacer has been on Valencia’s books since joining the club in 2005 and came through the youth system before eventually breaking into the first team as an 18-year-old in 2011.

After a year on loan with Getafe in 2012, Alcacer was handed a first team place last season and rewarded then-boss Miroslav Dukic for his faith in him by netting 14 goals in 37 appearances, despite a disappointing campaign that saw Valencia finish eighth in the La Liga table.

His impressive form for his club saw the 21-year-old called up to the senior Spain squad during the recent international break. With Diego Costa out injured, Vicente Del Bosque started him up front for their Euro 2016 qualifier against Macedonia, and the youngster didn’t let his country down as he scored on his full debut during a 5-1 win.

It appears Alcacer has now caught the eye of Arsenal and Chelsea as the Daily Star claim the pair are keen to bring him to the Premier League and are set to test Valencia’s resolve with €18m (£14.5m) bids when the transfer window reopens in January.

It remains to be seen whether that kind of money will be enough to persuade the La Liga outfit to cash-in, but you’d expect they will play hard-ball for one of Spain’s hottest young stars.

Gunners boss Arsene Wenger has recently splashed out on Danny Welbeck and Alexis Sanchez while Jose Mourinho brought in Diego Costa, Loic Remy and Didier Drogba this summer, so another striker is not exactly seen as a top priority for either manager right now.

However, being only 21, Alcacer is certainly one for the future, so if this report is accurate then it appears the London duo are planning ahead and are keen to snap up one of Europe’s top young strikers before his value increases any further.