Liverpool get back to Premier League action when they take on West Ham at Upton Park on Saturday. Here is the starting eleven we think Rodgers will select.

Liverpool get back to Premier League action when they take on West Ham at Upton Park on Saturday evening. Here is the starting eleven we think Brendan Rodgers will select.

Goalkeeper: Simon Mignolet is certain to start the game unless he picks up a late injury.

Defence: Glen Johnson remains injured and Jon Flanagan has been ruled out for several months after knee surgery so Javier Manqillo will continue at right back. Martin Skrtel has only just returned to training so it’s unlikely he’ll be ready to play just yet, so Mamadou Sakho should continue alongside Dejan Lovren at the back.

Midfield: West Ham is a tough place to go and they’ll be a physical side so we think Rodgers may opt to bring Lucas Leiva in to add some more steel to his midfield. This would allow Jordan Henderson to push further forward where he can put the hosts under more pressure further up the pitch.

Attack: With Daniel Sturridge still out, Mario Balotelli will continue to spearhead the team with Adam Lallana and Raheem Sterling likely to be in support, although Lazar Markovic is pushing for a recall after being suspended in midweek.

Here’s how Liverpool could line-up: 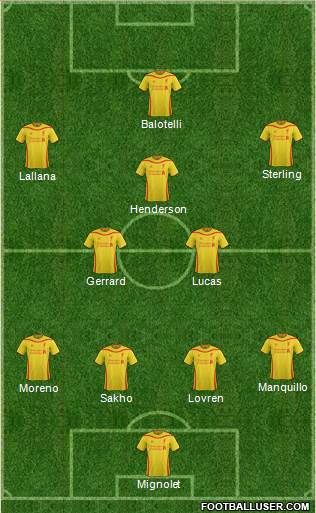