Wilshere Out: Predicted Arsenal Starting XI To Take On Tottenham

Goalkeeper: Wojciech Szczesny is expected to be recalled after being rested for Tuesday’s League Cup clash. David Ospina will drop back to the bench.

Defence: Calum Chambers is the only defender expected to keep his place from the midweek defeat to Southampton with the youngster moving to right-back to deputise for the injured Mathieu Debuchy. Per Mertesacker will play despite nursing a knock while Kieran Gibbs and Laurent Koscielny will also be recalled.

Midfield: Mikel Arteta should come back in to skipper the side and Arsene Wenger must decide who best to partner the Spaniard. Aaron Ramsey hasn’t been in top form yet this season but with Jack Wilshere playing the full 90 minutes on Tuesday, I think the Welshman will get the nod in midfield.

Attack: Mesut Ozil put in a Man of the Match performance against Aston Villa last week playing in his favoured central role and I think we’ll see the German retain that position on Saturday. Alexis Sanchez scored a stunning free-kick against the Saints and I’d be surprised if Wenger left him out this weekend with the Chilean joining Santi Cazorla in supporting Danny Welbeck up front.

Here’s how Arsenal could line-up on Saturday: 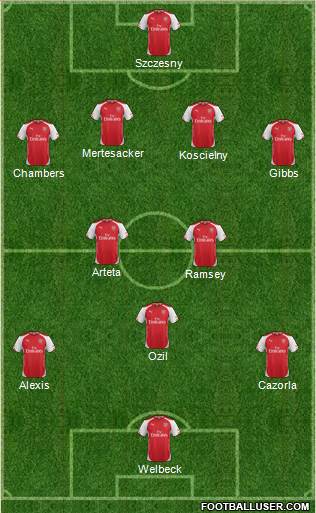