Chelsea are in Slovenia preparing to take on Maribor in the Champions League on Wednesday night. Here is the side we think Jose Mourinho will put out:

Chelsea are in Slovenia preparing to take on Maribor in the Champions League on Wednesday night. Here is the side we think Jose Mourinho will put out:

Goalkeeper: Petr Cech played in the 6-0 win at Stamford Bridge two weeks ago so the Czech international could get another run-out tomorrow.

Defence: Cesar Azpilicueta has missed Chelsea’s last three domestic games due to suspension so he’s fresh and is likely to replace Filipe Luis at left-back with Branislav Ivanovic keeping his place on the right. Mourinho could opt to rest skipper John Terry ahead of Saturday’s big clash against Liverpool so Kurt Zouma is likely to start alongside Gary Cahill at the back.

Midfield: Cesc Fabregas and Nemanja Matic have forged an excellent partnership in midfield and with John Obi Mikel missing the trip through injury, the duo are expected to line-up together once again on Wednesday night.

Attack: Jose was critical of his attackers for their lackluster display against QPR at the weekend so he could shake things up with Andre Schurrle likely to come back in for Willian. Ramires could also be set to make his first start in over six weeks after recovering from a groin injury but Eden Hazard should keep his place with Oscar the man to get a rest. Diego Costa is expected to be left out to protect him due to his troublesome hamstring, so with Loic Remy out injured Didier Drogba should start up front. 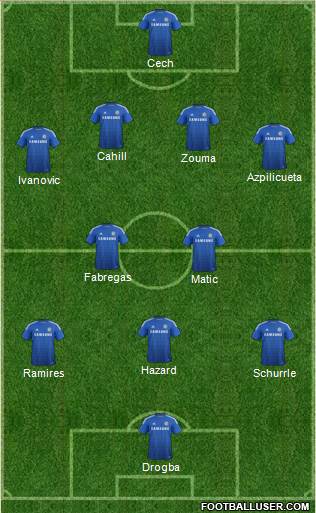